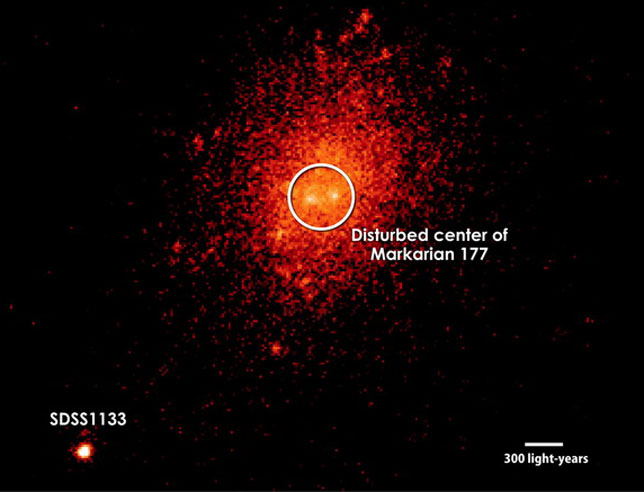 Astronomers discovered a black hole positioned far away from its host galaxy. Initially, they thought they are looking at a supernova, but a closer examination seems to indicate that a black hole has gone rogue. When galaxies collide, they form a larger galaxy. Black holes, usually located at the core of each galaxy, will merge as well.

But scientists have been searching for proof that some black holes do not merge, because already created gravitational waves interfere with the process. The powerful gravitational waves manage to push one black hole out, according to the theory. Researchers will gather more data to confirm or refute the hypothesis.

Either way, the finding is exciting, because if the telescopes see a supernova, it will turn out to be a very uncommon specimen. Usually, supernovas shine this bright for about one year. After a huge explosion, they gradually dim. SDSS1133, the bright spot lying at the margins of Markarian 177 galaxy, was observed for more than 60 years at an abnormally high luminosity.

“With the data we have in hand, we can’t yet distinguish between these two scenarios,” Michael Koss said, now an astronomer at ETH Zurich, the Swiss Federal Institute of Technology. “But, one exciting discovery made with NASA’s Swift is that the emission of ultraviolet light of SDSS1133 hasn’t changed for a decade, which is not something typically seen in a young supernova remnant.”

Evicted black holes continue to shine until they consume all the gas that travelled along with them. It seems that this is the case here, although the spot has been getting brighter in the last half a year.

A third explanation would be that SDSS1133 is a luminous blue variable (LBV), a type of massive stars which go through longer eruption periods. In the end, they reach the supernova stage. If that is the case, we are witnessing an extreme case of LBV.

Anyway, for those who can’t really appreciate how far away from Earth these processes are taking place, Koss says that SDSS1133 moves really slowly, at just 100 km per second, so it will not approach our galaxy anytime soon.