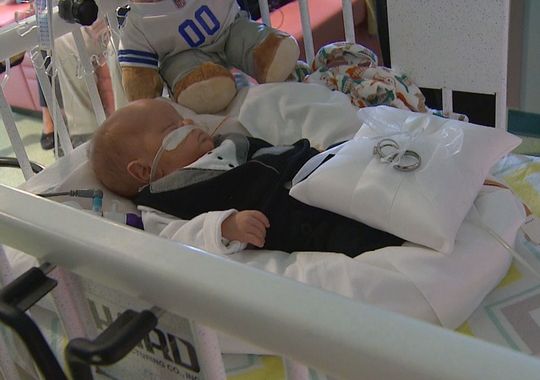 A Fort Worth couple got married on Tuesday in the neonatal intensive care unit where one of their two twins is fighting for his life. JJ’s mother and father became man and wife on Tuesday after their wedding was officiated on Tuesday in the NICU at Cook Children’s Medical Center. JJ wore a tuxedo onesie and was his parents’ ring bearer.

However, this blissful occasion where JJ’s parents became one came after a difficult loss, in which two became one. On September 2nd, Kristi Warriner gave birth to her two premature sons, however, one of them was stillborn. JJ survived and has been getting stronger ever since.

When he was born, JJ weighed just one pound 13 ounces and ever since, he has tripled in size. Because of having severely underdeveloped lungs, JJ had to remain in the NICU for eight weeks after being born. And after spending all this time in the neonatal intensive care unit, Kristi and Justin Nelson decided that this was the best place to officiate their wedding.

“We thank God every day for JJ getting better and stronger. It’s a big part of my day coming down here to see him. The hardest part is leaving him and going back home”

In approximately one month, the Nelsons hope that they can finally take JJ home as their ultimate wedding gift. They explained that it’s because the NICU room was the place where their faith has been tested moth that they decided to marry here. For over 11 weeks, they watched JJ struggle, fight and survive, they celebrated Halloween together and most likely, they will also spend Thanksgiving there too.

“Our mission behind all this was to hopefully let others [know] that have been there, are there, or unfortunately one day could be in a similar situation as ours, and let them know they are not alone.”

Nelson said, speaking about one of the most heartbreaking situations that a parent can go through.

The staff at Cook Children’s Hospital was glad to aid the family become closer. Wini King, assistant vice president of communications said that their mission goes beyond just helping the children. They always try to help families become closer, stronger and healthier.