You are here: Home / Business / William A. Ackman to Purchase the Highest Ever Paid for Manhattan Apartment 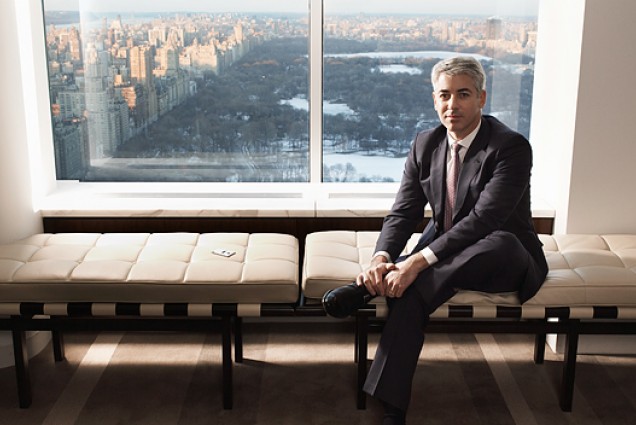 William A. Ackman will soon purchase the penthouse apartment of One57, the luxurious 90-story hotel and condominium building. The silver-haired hedge fund mogul gestured toward the glittering glass building on 57th Street from the conference room of Pershing Square Capital Management in Midtown Manhattan. The Winter Garden, as the penthouse was called, will be acquired for no more than 90 million dollars, making it the highest ever paid for apartment in Manhattan. William Ackman will soon be the proud owner of a 14.000 square-foot penthouse on the 75th & 76th floor of the One57 building. One critic has referred to the One57 hotel as

“A luxury object for people who see the city as their private snow globe.”

Even more mind-boggling than the extravagant acquisition is the fact that Ackman has no intentions of living there. As a matter of fact, he resides at Beresford (in a 26 million dollar apartment), off Central park, with his family. He also owns several houses in Long Island, Chatham and Bridgehampton. For him, the Winter Garden is nothing but an investment opportunity.

“Thought it would be fun. So myself and a couple of very good friends bought into this idea that someday, someone will really want it and they’ll let me know.” – William A. Ackman

It doesn’t matter if it’s a lavish apartment, an annual vacation or simply an attack on the company. If it has Bill Ackman involved, then it’s big. At the moment, the hedge fund mogul oversees over 17 billion dollars (up 32% in a year). Other hedge funds are barely breaking even. Ackman is also a driving force behind one of the most controversial mergers this year. We are talking about Valeant’s 53 billion dollar hostile takeover bid for Allergan. One of the reasons for is success must be the over-sized ego.

While some of his critics agree that he’s big, others believe that his fund has great chances of blowing up. Let’s take the Allergan case as an example. This stake alone made up 37% of his fund in the fall, and if anything was to go bad, it would have turned into a disaster. Ackman has also bet one billion dollars that Herbalife will fail. Until now, his bet hasn’t panned out. Another similar bet was the 2 billion one for target, which lost 90% of its value.

Despite his Target failure, Ackman has an impressive record: his funds have returned 21% net of fees in the last 10 years. He has managed to pull this off by always going on the offensive. His persuasive powers will definitely be needed in December, when Allergan shareholders will hold a special meeting. That is when he will try to replace a majority of the company’s board and work towards the takeover by Valeant.

In the Canadian Pacific case, Ackman managed to triple the value of his original investment by replacing the board and forcing through a turnaround.

“In this business, if you don’t make mistakes, you’re either a liar or you don’t take many swings at the ball.” – Leon Cooperman, founder of the hedge fund Omega Advisors.

Ackman has definitely made some mistakes in his life, but it is impossible to always play it safe. In the meanwhile, its seems that the hedge fund mogul will be enjoying his spectacular view from his penthouse. You know, maybe he will throw some parties until someone decides they really want to buy the place.