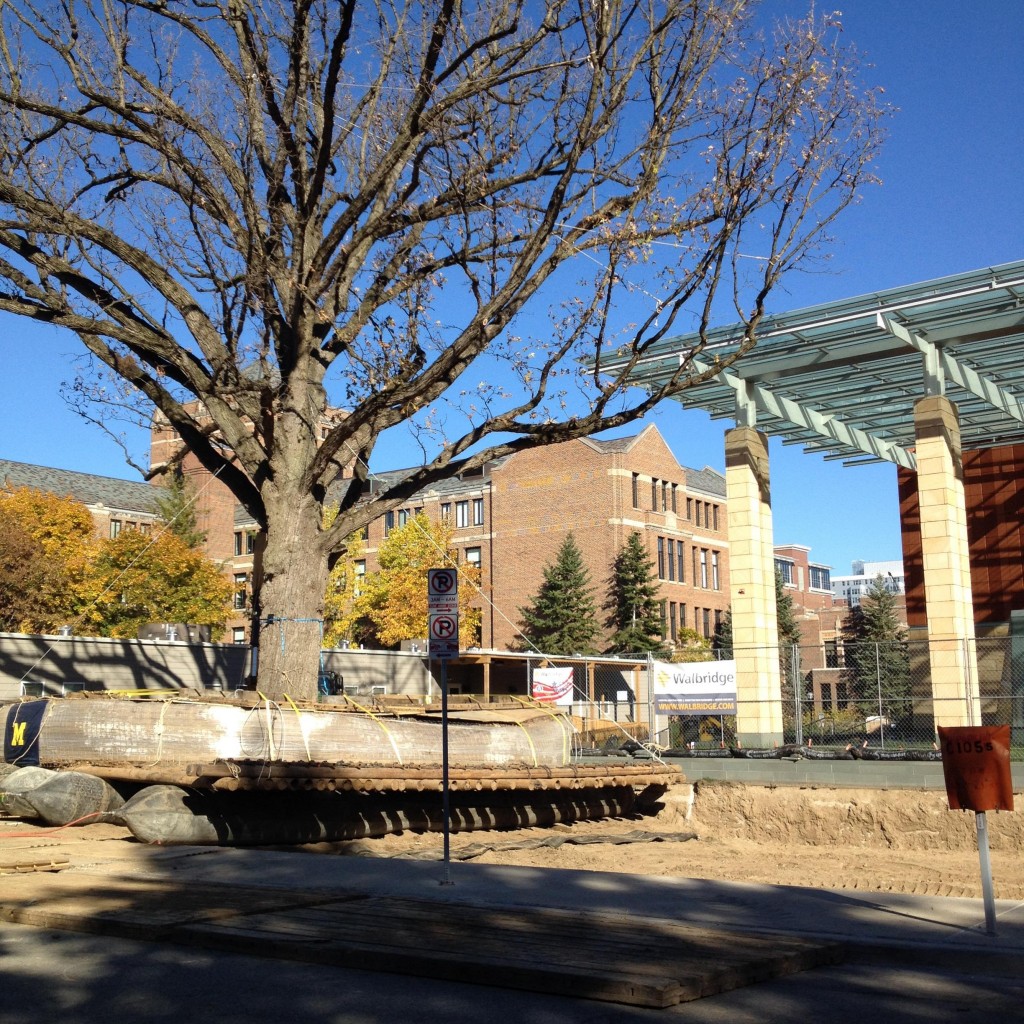 A 250-year-old oak tree at the Ross School of Business on the University of Michigan’s campus is about to be moved by a crew of workers. After a 12-hour work day on Saturday, the 700,000 –pound 65-foot-tall but oak tree is almost completely transplanted.

On Saturday, Oct. 25th, workers inflated air bladders underneath the oak tree to ensure its secure unearthing while securing its six-stories-high limbs. Two 90,000-pound, 96-wheeled transporters were brought in to move the oak tree to its new home, the corner of Tappan Avenue and Monroe Street.

The process of relocating the legacy tree has taken over two months of efforts. Construction managers decided on Saturday that they had to interrupt their work and pick up where they left off on Sunday morning, so they dropped the tree outside of its designated transplant spot.

On Sunday, workers emulated Saturday’s process and placed the deflated air bladders underneath the base of the tree again, creating space so that the transporters can be inserted. The tree will be moved yet again, albeit a much shorter distance, to its final residence.

“Whenever we move big trees like this, there’s always something that slows you down. It’s not an exact science. In this particular case there was a little bit of a root mass beneath the tree – which is not abnormal – and it slowed down the raising of the tree just a little bit,”

Before the tree could be placed back on transporters on Sunday, a lot of work had to be done and the final move was expected to begin at 1:30 PM. When the transporters would finally be brought back in place, the oak tree could be moved less than 50 feet into its new home.

However, work is still underway and the air bladders are proving to be quite difficult to inflate so as to level the tree before moving it. Reporters on the scene continue to announce readers that the tree is being treated tenderly.

“To me it’s the engineering aspect of how they actually get it done. That’s what’s most interesting. I’m in the building trades so I’m used to thinking about how to make things work in the physical world, and I really just wanted to look at how the heck you move a tree like this. It’s really interesting.I didn’t know what to expect, but just by watching I’ve kind of picked up on exactly what they’re trying to do and it’s not at all what I would’ve expected them to do.”

We are now waiting for the process to be completed.