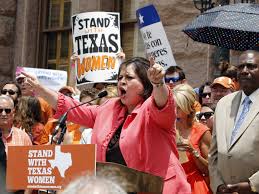 By blocking the state law that had imposed new and strict requirements on abortion providers, the Supreme Court has effectively allowed more than a dozen Texas abortion clinics to reopen. The decision was made on Tuesday and represents an interim step in the legal fight that has been dividing Texas lawmakers for some time.

If the law would have been allowed to stand, Texas women would have had to travel over 150 kilometers to the nearest abortion provider as eight of the state’s clinics would have been forced to close. The Supreme Court’s order was concise (five sentences long) and did not provide any explanation of the justice’s reasoning.

Abortion rights activists, on the other hand, welcomed the Supreme Court’s decision claiming that if appeals went forward while the clinics remain closed, there would have been a great chance that they would have never reopened.

“If the stay entered by the Fifth Circuit is not vacated, the clinics forced to remain closed during the appeals process will likely never reopen.”

lawyers with the Center for Reproductive Rights said.

State officials insist that the new law was created to protect women’s health and interests by mandating several prerequisites for abortion providers: mainly that they offer hospital-like conditions in order to be functional. Abortion providers considered these regulations to be expensive, unnecessary and a ploy to simply put many of them out of business.

The Texas law that has caused so much dissent consists of two parts: the one require all abortion providers to meet “ambulatory surgical center” standards (where staffing, building and equipment is concerned). The other mandates that doctors performing the abortion have admitting privileges at nearby hospitals.

With its decision, the Supreme Court blocked both the surgical-center requirement entirely and the admitting privileges requirement (seeing that it applied to clinics located in McAllen, Tex. and El Paso).

“Tomorrow, 13 clinics across the state will be allowed to reopen and provide women with safe and legal abortion care in their own communities.”

Nancy Northup, president of the Center for Reproductive Rights said during a statement.

She added that advocates were still pursuing appeals.

“This fight against Texas’s sham abortion law is not over.”

of an abortion clinic, in full compliance with the law. He continued that those who did not live close enough to such a clinic did not have any nearby in the first place and as such, could obtain abortions across the state line in New Mexico.