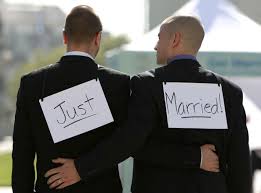 On Monday, the Supreme Court turned away appeals from five different states which sought to prohibit same-sex marriage and in so doing, it effectively legalized gay marriage in those particular states. Additionally, by not resolving the issue on a national level, the same-sex marriage may be likely to be legalized in other states.

Delays on gay marriage were immediately ended by court order in states like Utah, Virginia, Indiana, Oklahoma and Wisconsin, whose appeals were rejected. Soon after hearing the news, couples in six other states (Colorado, North and South Carolina, Kansas, West Virginia and Wyoming) should also consider themselves free to get married, as these states are also bound by the same rulings that were put on hold until the Supreme Court’s review.

With this rejection, the Supreme Court effectively made same-sex marriage legal in 30 U.S. states.

Gov. Gary Herbert, Utah, says he is both surprised and disappointed by the Court’s decision.

“While I continue to believe that the states do have the right to define marriage and create laws regarding marriage, ultimately we are a nation of laws, and we here in Utah will uphold the law.”

Experts and advocates on both sides insist that the justice system must step in and decide such an important issue of national importance instead of abdicating that responsibility to lower court judges.

Evan Wolfson, president of Freedom to Mary, urged the high court to finally settle the matter.

“[A] delay in affirming the freedom to marry nationwide prolongs the patchwork of state-to-state discrimination and the harms and indignity that the denial of marriage still inflicts on too many couples in too many places.”

On the other hand, Ed Whelan, the Ethics and Public Policy Center representative and an opponent of gay marriage, accused the court of irresponsibly denying to review the cases.

Decisions on same-sex marriage cases might also be issued by the Cincinnati and San Francisco appeals courts. Cincinnati based 6th Circuit Judges, for instance, seem more likely to rule in favor of state bans for Kentucky, Michigan, Ohio and Tennessee, than their 9th Circuit counterparts in San Francisco, who are considering restrictions on marriage in Idaho and Nevada.

“With the Supreme Court’s announcement today, it is clear that the position of the court of appeals at the federal level is the law of the land and we’re going to go forward enacting it.”