You are here: Home / National News / Skulls Discovered in Waste Transfer Station Near Books on Witchcraft and Satan 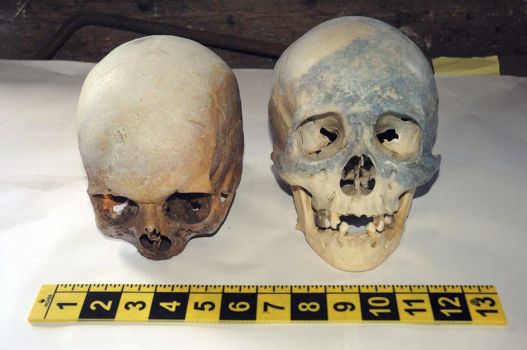 According to police statements made on Friday, two human skulls were discovered at the Stamford Refuge Transfer Station, near some books and videos on witchcraft and Satan.

The skulls belonged to an older man and woman, police claims, and were found on Thursday in a pile of recyclables, brought from the home of a recently departed man in Fairfield.

“What we are hearing from sources and stuff is that this guy, who has passed away, was into the occult. That’s what we’re investigating now.”

One of the skulls was missing its jawbone, which police officers found nearby. The other one was complete.

Hohn noted that officers searching through the debris from the man’s home also came across books on witchcraft and videos dealing with Satanism. The skulls were immediately sent to the medical examiner’s office, where it was determined that neither skull presented signs of trauma.

In order to get a more accurate estimate of the ages of the man and woman whose skulls were discovered, police will be sending them to an anthropologist.

“We’re looking at all angles to determine where they came from, to make sure it wasn’t a grave robbery,”

“You could buy these skulls online. We also want to make sure there is nothing sinister, that no one was murdered.”

Police officers were called in after a longtime employee at the transfer station spotted the skulls lying in a pile of material dropped off on Thursday. Dan Colleuori, solid waste supervisor, said that employees had noticed the skulls but thought that they weren’t real.

“I said, `Yeah,’ and brought him over to the police. I assume they thought they were plastic because they put them into the recycling,”

Part of the larger skull appeared to have been colored blue, however Hohn told reporters that the medical examiner said the coloring was the result of the skull being bleached.

When interviewed, the father of the deceased Fairfield man claimed that the skulls had been purchased online by his late son for $1,000 a piece.

“He would have them on display in the living room, and I’m glad that they’re gone now,”

He added that he hadn’t thought that the skulls were real. According to DiVitto, his son, Robert, had led a troubled life, beset by his “personal demons”.

“I don’t know what a skull is supposed to look like. They looked like what you are going to see all over town tonight,”