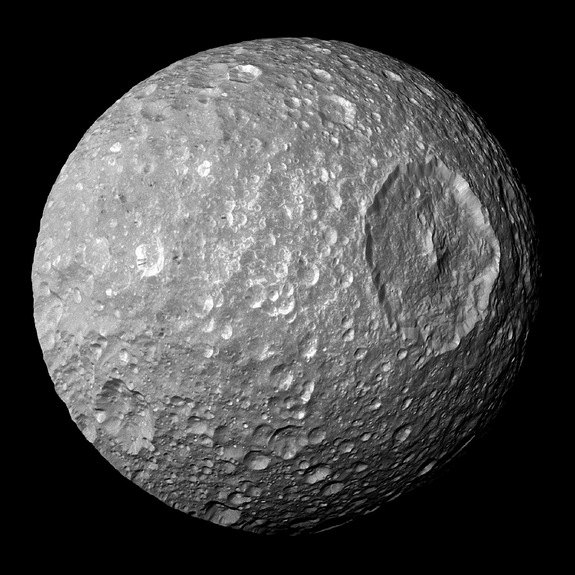 NASA’s Cassini-Huygens left Earth in 1997 and traveled for seven years until it reached Saturn and its numerous natural satellites. The spacecraft even traveled close to Venus and Jupiter on the way to fulfill its main scientific purpose. The Huygens probe landed on Titan in 2005. Cassini continued its journey in the Saturn system composed of at least 62 known celestial bodies, besides the planet.

Cassini provided some highly useful scientific data recently. Mimas, one of the planet’s moons is 250 miles in diameter and has one large 88-mile-long crater. The image helped Mimas, the smallest of the planets’ eight main moons, get stuck with the nickname the Death Star.

The Death Star has one weird orbit. Researchers believe that, although the pendulum-like movement called libration is not uncommon, Mimas suffers from an extreme case. Images provided by Cassini convinced scientists that in one particular point, the moon has an abnormal libration. The explanation is probably linked with the Mimas’ interior.

Radwan Tajeddine, a research associate at Cornell University, discovered the characteristic. “We’re very excited about this measurement because it may indicate much about the satellite’s insides,” Tajeddine said in a statement. “Nature is essentially allowing us to do the same thing that a child does when she shakes a wrapped gift in hopes of figuring out what’s hidden inside.”

Naturally, everyone asks if there is an ocean hiding under the crust. “If Mimas does have an ocean, this would definitely be another interesting body in the solar system to be added to list of potential ‘life-friendly’ environments,” Tajeddine said.

But, unfortunately, the characteristic does not seem to indicate that Mimas hosts an internal ocean, according to Tajeddine. The reason is that the heat produced by the moon’s interior easily escapes the outer layers, so water would immediately freeze. However, the weird orbit may cause some heat producing friction that would maintain the core warm.

Another hypothesis explaining the abnormal libration is that Mimas’s core has a peculiar shape. The study author says that like some of its sisters, Mimas may have been a larger rock that circled Saturn. Gravity elongated the rock, which was later covered in ice. The celestial body probably got the present shape as it moved further from the planet and gravitational forces weakened.

In the end, Mimas proves to be more interesting than just a simple rock, even though the small moon will have problems reaching Titan’s status. The largest of Saturn’s moons is so complex that it may host simple biological organisms, according to scientists.