You are here: Home / National News / Same-Sex Marriages Begin to Be Officiated in the South 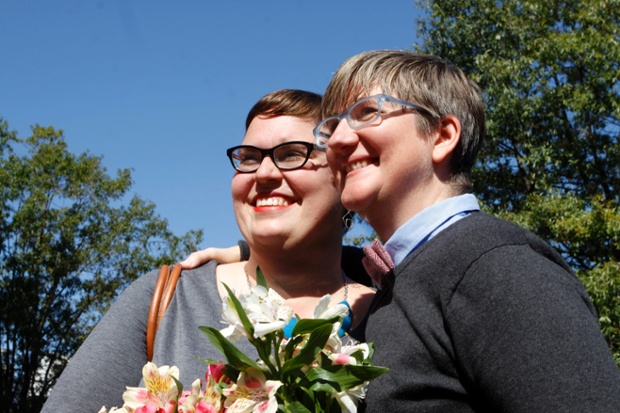 After the Supreme Court turned away the appeals of five U.S. states who had wanted to impose bans on same-sex marriage, the South is now, for the first time, crossing into new territories as restrictions on gay marriage are unconstitutional throughout the 4th U.S. Circuit. As such, any such ban in West Virginia as well as North and South Carolina will also fall as soon as judges follow through the appellate court’s orders.

Carol Schall and Mary Townley were among the pioneers of the movement, as the two wanted that their California marriage also be recognized by the state in which they were raising their daughter. The two challenged the Virginia ban and won- a victory that reveals that states once considered inhospitable to same-sex partnerships have now changed their viewpoints.

“It says the South is a wonderful, welcoming and open place,”

However, as there are supporters of the movement, there are also southern conservatives keen on fighting against gay marriage until the bitter end.

“Until the courts rule on the matter, South Carolina will seek to uphold our state constitution,”

Social divisions were also exposed as the first legal same-sex marriages began being officiated in the region. Cities and rural areas appeared divided, as were progressive Mid-Atlantic States as opposed to the Deep South.

Other former opponents of gay and lesbian marriages have now changed their minds and refuse to continue fighting a losing battle:

“The South, like the nation, is changing. We’ll accept same-sex marriage just like we accepted desegregation and the end of slavery. These other barriers that have burdened us for too long are coming down and the people in the South are open to change.”

William R. Ferris, professor with the Center for the Study of American South at the North Carolina University said.

According to polls, the South has the least support for same-sex marriages in the U.S., however, even here, viewpoints are shifting. Southerners could experience several same-sex weddings on Monday in Virginia that testified to the bending of the arc of history in another direction than before.

In the end, these court rulings will only change the culture of the South, as they did so many years ago when desegregation was so widely opposed by Southerners.

“I think these kinds of cultural shifts in society and in religion mean that we become a much more accepting, tolerant, diverse community. That’s really important, because we have to learn here in the South how to live with our differences, instead of fighting over our differences.”

Rev. Nancy Petty said, a lesbian of the Pullen memorial Baptist Church, which was dis-fellowshipped by the Southern Baptist Convention after the congregation welcomed gays and lesbians.