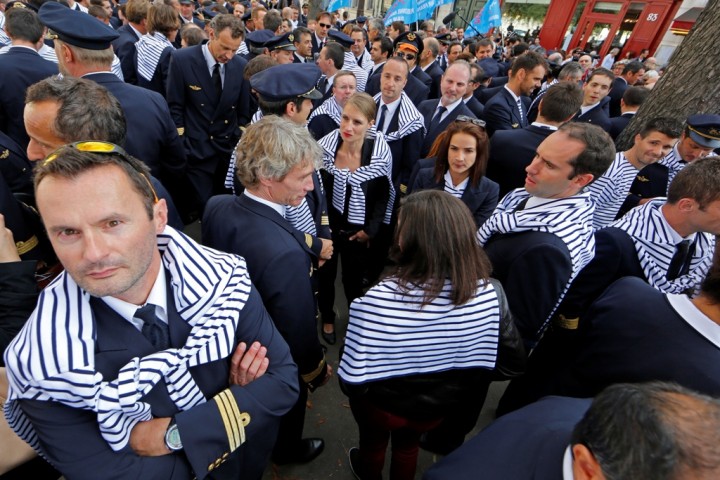 Air France pilots decided to go on strike to preserve the rights of future pilots to be hired on the same conditions as they are at the moment. The two weeks strike may have worse consequences for the company then if it had agreed to the demands in the first place. An initial estimation sets the company’s losses at around 500 million Euros ($800 million).

Air France – KLM group will have to revise its revenues once again for 2014. The second largest European airline group by revenue stated on July that its earnings before interest, tax, depreciation and amortization will be reduced from 2.5 billion euros to somewhere between 2.2 and 2.3.

The company planned to expand its low-cost branch to stand up against successful low-cost airlines such as Ryan Air and EasyJet. Air France planned to invest 1 billion Euros to expand Transavia, its low-cost wing, all over Europe.

The French National Union of Airline Pilots was discontent with the company’s plan. The members said that jobs would be moved out of France and wages will be diminished if the expansion takes place. Even SkyTeam Pilots Association declared they back the Air France pilots’ demands during their September strike. Air France KLM responded by saying that it will focus instead on expand the low-cost carrier at national level only.

During the pilot strike that lasted for two weeks, the company said that the total passenger traffic fell by 15.9 percent. The bookings for the last quarter have been affected as well, but just by 1 to 2 percent.

“The group estimates that part of this delay could be progressively reduced over the coming weeks,” the carrier said in a statement, adding that it was difficult to “quantify this adjustment exactly given the exceptional nature of the event”.

Even if the company managed to save money as its planes haven’t burned fuel, buying tickets to competitor airlines for customers made out most of the losses suffered by the French – Dutch company.

However, Air France-KLM CEO, Alexandre de Juniac, plans to keep his promises made in the Perform 2020 strategic plan. The 1 billion Euros planned for Transavia will be used to buy an extra 53 planes, expanding the fleet to 100 aircrafts by 2017 to be used at national level. Shares in Air France-KLM dropped by 22 percent since the strike began.