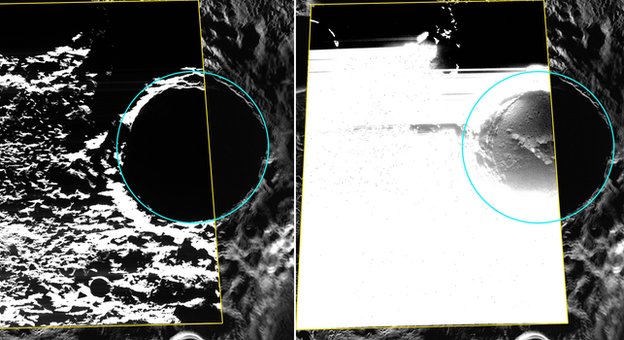 Searching for extraterrestrial water presence has never been so rewarding. Messenger, NASA’s probe orbiting Mercury, has discovered ice sheets on the planet’s North Pole. Finding ice on the Sun’s closest neighbor is astonishing. While Earth lies comfortably at 93 million miles away from the Sun, Mercury and the star are separated by just 36 million miles. Because it has almost no atmospheric layer to retain heat, the temperatures vary from – 280 degrees F during the night to 800 degrees F during the day. However, the poles are always colder than -136 degrees F.

Hints that water may exist on Mercury were discovered a couple of decades ago. NASA’s Mariner 10 was the first to map craters on Mercury in the 1970s. When scientists working with the Arecibo radio telescope in Puerto Rico pointed their instruments toward the planet in 1990, the noticed that some areas reflected the radar signal, a behavior displayed by ice.

In 2004 NASA sent Messanger (MErcury Surface, Space ENvironment, GEochemistry, and Ranging) to orbit Mercury. The probe reached the planet in 2011 and will end its mission when its fuel runs out in 2015.

Messenger looked at Prokofiev, an impact crater with almost 70 miles in diameter. Scientists were amazed to discover that the texture of the ice is highly uniform, meaning that the layer of ice may be young. Another crater called Berlioz seems “covered by a thin layer of dark, organic-rich volatile material.” The ice sheets are bordered by sharp areas, another indication of their early age. Water can remain in solid form because the deepest points of the craters are always shadowed.

“This result was a little surprising, because sharp boundaries indicate that the volatile deposits at Mercury’s poles are geologically young,” said Dr Chabot, who published the results of the study in the journal Geology.

The confirmation that ice exists on the closest planet to the Sun will force researchers to reassess their hypotheses regarding the presence of water and organisms in other parts of the Solar System. “If you can understand why one body looks one way and another looks different, you gain insight into the process that’s behind it, which in turn is tied to the age and distribution of water ice in the solar system,” says Chabot. “This will be a very interesting line of inquiry going forward.”