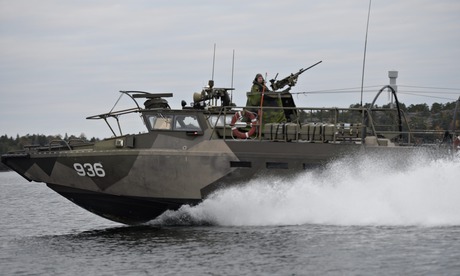 As tensions with Moscow grow, Sweden has decided to increase its military presence in the Stockholm archipelago on Saturday, reawakening memories of the Cold War, when it was hunting Soviet submarines along its coast. The military is searching Swedish waters for “foreign underwater activity” and has mobilized ships, troops and helicopters for this aim.

This decision comes after Moscow has repeatedly involved itself in the Ukraine crisis, which in turn, has created increasing tensions among Nordic and Baltic states. Last week, Russian navy ships were accused by Finland of interfering with an environmental research vessel located in international waters.

According to the Swedish military, the information concerning suspicious activities stemmed from trustworthy sources which cannot be named. Over 200 military personnel will be involved in the search. The hunt allegedly began after a Russian radio transmission was intercepted over emergency frequencies. Additional encrypted radio traffic was intercepted on Friday, reporters say, after it was first emitted from the enclave of Kaliningrad, home to the Russian Baltic fleet’s headquarters.

When confronted with this situation, the Russian Defense Ministry released a statement on Sunday, claiming that its vessels had not been involved in any emergency situations:

“Russian Navy ships and submarines are fulfilling their duties in the world ocean waters in accordance with the plan,”

“There has been and there are no extraordinary, let alone emergency, situations involving Russian warships.”

In light of these events, ships, helicopters as well as amphibious units were sent out to investigate this suspicious activity. The Swedish military stated that no armed interventions had occurred and said that they could not offer any information as to those responsible for the activity in the archipelago.

“We still consider the information we received as very trustworthy. I, as head of operations, have therefore decided to increase the number of units in the area.”

If these searches find any evidence of Russian military activity within Swedish coastal waters, Prime Minister Stefan Lofven will have his first real test since coming into office.