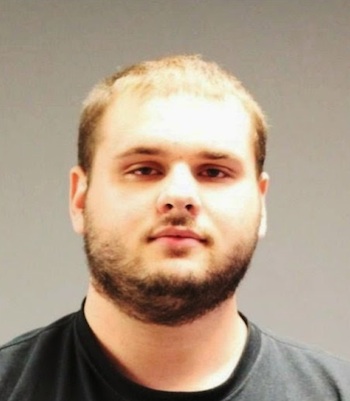 The child rape suspect alleged to have cut off his GPS monitoring bracelet and who began a cross-country crime spree has been finally captured by authorities in New York on Wednesday. Police officers announced that the suspect who had been on the run for over a month was apprehended because of missing license plates.

Gregory Lewis, 26, was arrested in the Village of Fort Edward just before midnight, when a New York State Trooper spotted the man driving a car with missing license plates. The trooper attempted to pull Lewis over, however, the man sped away. Local patrol units were notified a short time later, right when 911 calls were being received that a vehicle had crashed into the Hudson River.

“He actually drove to the end of a dead end street and didn’t realize it was a dead end and drove down an embankment and into the water,”

Lewis escaped the sinking car and pulled a gun on a witness who attempted to help him after the crash. The man ran off but a police K-9 tracked him down in the woods. He then announced officers that he was prepared to surrender.

The handgun Lewis pulled on the witness matched the description of a gun stolen from a relative of the suspect in Southbridge, in September. According to a statement made by Durway, Lewis used the stolen gun to rob his victims, threatening them that if they would inform the police, he would come back for them.

On the 5th of August, Lewis was arrested under charges of sexual assault of a child under 14. He was released on bond, and on the 15th of September, Lewis cut the court-ordered tracking device and left it on the lawn of his alleged victim before fleeing.

A series of violent incidents followed henceforth. They include alleged rapes, kidnappings, robberies of female escorts in Colorado, North Carolina and Oregon and even armed robbery, a police statement said.

Police also announced that Lewis stole the license plates off vehicles similar to the one he drove during the manhunt so that he could avoid being detained. Earlier this week, police received intelligence claiming that Lewis had raped a 13-year-old girl in Southbridge.

The man is currently being held overnight, without bail, at the Washington County, New York jail. He is expected to be arraigned Wednesday as a fugitive, awaiting to stand trial for the sexual assault of the girl in Southbridge.