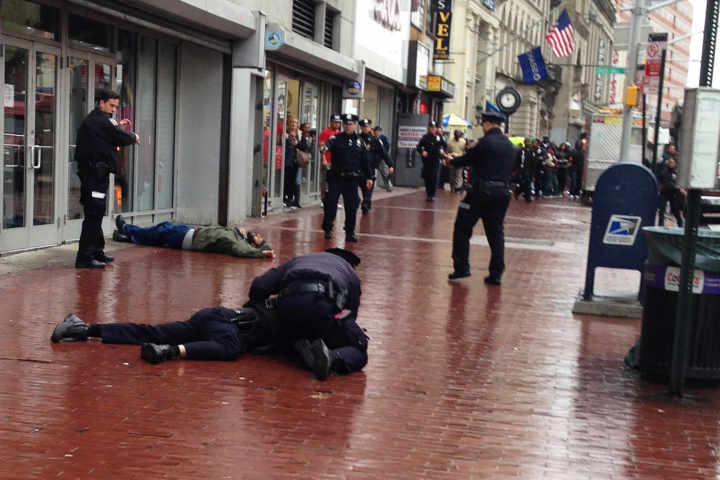 The New York City police shot and killed a man who attacked two officers with a hatchet. The attacker hit a rookie police officer in the back of the head and another in the arm. Both officers are in stable condition.

Officer Kenneth Healey, 25, has a “very serious injury to the backside of his head,” said William J. Bratton, the police commissioner. The other officer, Joseph Meeker, 24, will soon be released from the hospital.

Another women who was walking half a block away in a crowded area was hit in the lower back by a stray police bullet. She underwent surgery and is now in a stable condition.

The attack took place on Jamaica Avenue near 162nd street in Queens at 2PM. Four officers were patrolling on foot when a passer-by asked permission to take a picture of them. As the officers responded to the request, the attacker ran towards them from around the block, pulled the ax from his clothes, raised it with both hands and stroke Meeker in the hand, then Healey in the back of his head.

Mayor Bill de Blasio said at the press conference that officers displayed “bravery in the face of something absolutely unexpected.” He added, “They responded exactly as their training dictated.”

Commissioner Bratton said on Twitter that “There is no known motive for the attack at this time and the investigation is ongoing.”

The attacker had one ID stating he is 32 years old. His name appears to be Zale Thompson, a man who recently converted to Islam. Commissioner Bratton said that “There’s nothing we know at this time that would indicate that [Islamic terrorism] is the case.” The police checks the attacker’s hard-drives for signs of online activity, but no relations with extremist groups have been discovered.

NYPost says that former neighbors of Thompson declared that he became weird in the recent months. Fights with his girlfriend and his mother turned into norm before he decided to move out earlier this year. His Facebook profile is a vintage black and white picture of a veiled fighter. The cover photo has black Arabic writing on white background. Police will further investigate what triggered Thompson’s behavior.