You are here: Home / Tech & Science / Indonesian Cave Art Challenges Ideas about the Origin of Art 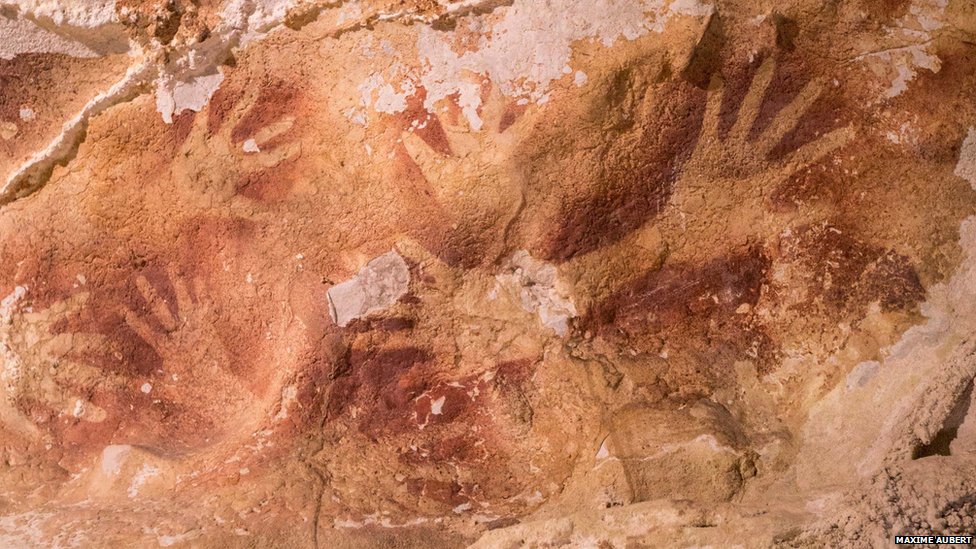 European cave art has long been thought to be the oldest expression of abstract thinking at humans. But cave art from Sulawesi, an Indonesian island, proves to be roughly the same age as the paintings found in the El Castillo cave, northern Spain. While the Spanish piece of art dates back to 40,800 years old, the Sulawesi stencils are believed to be at least 39,900 years old. One of the Indonesian hand stencils is in fact 2,000 years older than any European hand stencil.

The cave art from Sulawesi was discovered in 1950. According to the available instruments, researchers determined that they cannot be older than 10,000 years.

Maxime Aubert and Adam Brumm, both at Griffith University in Queensland, Australia, led the study together with an Indonesian team. They thought that it’s time to use radioactive dating to have a final answer regarding the age of the Sulawesi cave paintings. By using uranium decay technique, they dated calcite, a mineral that formed a crust on top of the paintings.

“It allows us to move away from the view that Europe was special,” says Maxime Aubert, an archaeologist at Griffith University in Queensland, Australia, who led the team. “There was some idea that early Europeans were more aware of themselves and their surroundings. Now we can say that’s not true.”

Another Indonesian cave image, this time of a babirusa, or “pig deer”, is believed to be 35,400 years old, roughly the same age as its European counterparts. While European and Indonesian hands stencils share stylistic similarities, the animals have different artistic approaches. Alistair Pike, a British archeologist not involved in the findings, told Nature that the Indonesian drawings “look ‘line-y’, almost like brush strokes”, while the European ones “look dabbed, almost like finger paint.”

While art can be interesting in itself, this case brings another important question regarding our ancestors. Neanderthals are believed to have authored the European cave art pieces, but there was no Neanderthal living in Indonesia at the time. Then are Neanderthals responsible for the European cave paintings? Researchers believe that the latest finding will start a real hunt for other art forms found in caves along the way from Indonesia to Europe. They hope that the route will provide more answers to the questions regarding the occurrence of abstract thinking.

The findings were published in journal Nature on October 9.