You are here: Home / Tech & Science / Surreal Images of Comet Whizzing past Mars Captured by Hubble 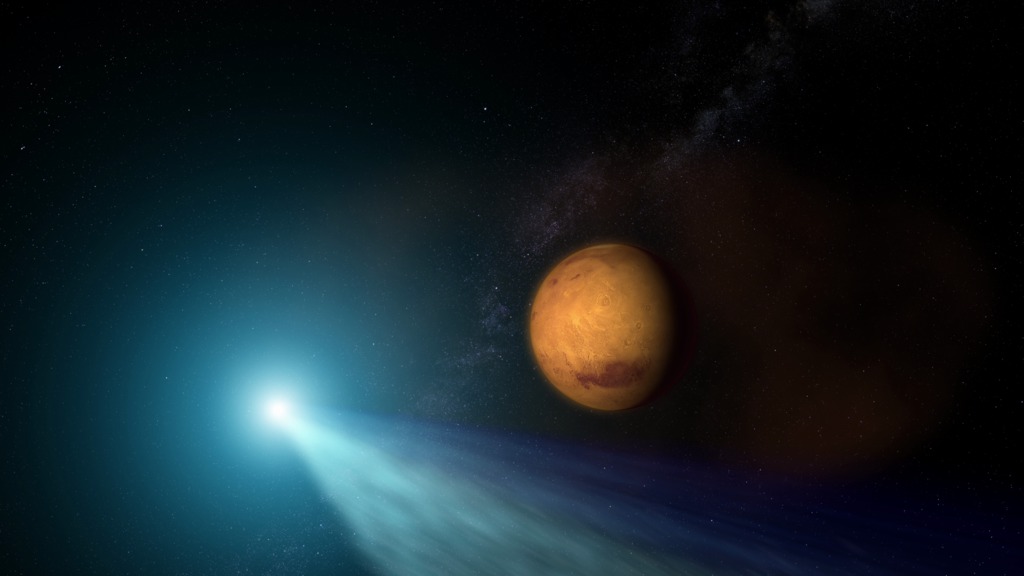 On October 20, a comet the size of a small mountain whizzed past the Red Planet. NASA’s Jet Propulsion Laboratory captured surreal images of this once-in-a-million-years event with the help of the Mars Reconnaissance Orbiter. The comet, often referred to as Siding Spring, is a new arrival in the inner solar system. As a matter of fact, this is the comet’s first orbit around the Sun. Specialists say that this comet, which originated in the Oort Cloud (situated in the distant reaches of the solar system), is a long-period comet.

Siding Spring came closest to Mars at 3:27 AM Japan time. It raced beyond the Red Planet at 203.000 Kph, and at a distance of 87.000 miles from it. Astronomer’s consider this a near miss. The comet was visible in the sky even before it raced past Mars. As it was heading towards Mars, it left behind a trail of cloud and debris.

The images obtained by Hubble are truly one of a kind. According to specialists, the Orbiter’s High Resolution Imaging Science Experiment camera (HiRISE) captured the first-ever well-resolved photos of the nucleus of a long-period comet. Every pixel in the photo represents 150 yards in reality. NASA experts say that this indicates that the nucleus is half the width than the estimation made by telescopes.

“What could be more exciting than to have a whopper of an external influence like a comet, just so we can see how atmospheres do respond? It’s a great learning opportunity.” – Nick Schneider, sensing team leader for NASA’s Maven Mission to the Red Planet

It was possible to capture these images with the help of JPL’s precise calculations of the comet’s position. JPL engineers oriented the Orbiter’s HiRISE camera after careful consideration. Twelve days before the comet’s closest approach, the Orbiter captured three test photos which proved that Siding Spring had strayed a bit from its predicted trajectory. After several adjustments the Orbiter was ready to record the most fascinating images of a long-period comet. Two additional test images ensures that the comet was within viewing range. 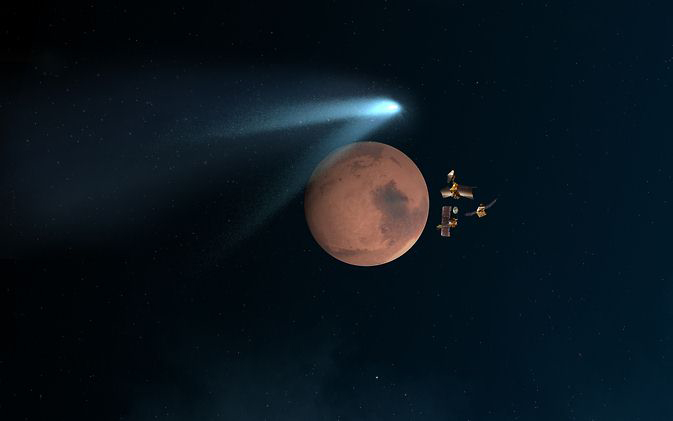 All the images can be seen on NASA’s official website, but we will attach some of them. One of them shows the comet’s nucleus and its surrounding radiant inner coma, while the other shows the trail of debris that the comet left behind. The comet’s icy nucleus is too small to be seen in the photos.

The only way to make the comet visible was with the help of composite pictures. This is because the Red Planet is 10.000 brighter than Siding Spring so it would be impossible to see all the details on the comet.

“We know how big Mars is – it’s an enormous planet – smaller than the earth, but bigger than the moon. And even though the nucleus of the comet is just 500 meters across, the coma and the tail are enormous.” – Jim Green, Director of NASA’s planetary science division