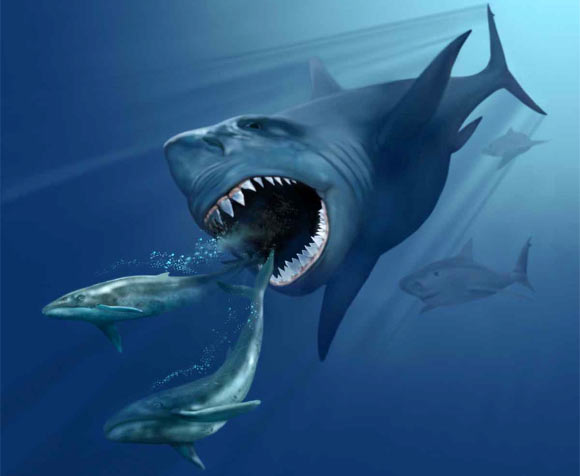 Megalodon, or “big tooth”, was the largest shark to have ever lived. The creature was so large that it fed on whales. C. megalodon, with C. from Carcharodon or Carcharocles, depending on who you ask, as there are two schools of thought debating its classification, lived until 2.6 million years ago. So no matter what Discovery told us in the recent period, there are no giant sharks swimming around.

Establishing the age of shark fossils is more difficult than in the case of other ancient animals, as sharks are mostly cartilaginous, a material unsuitable for preservation. Researchers base their estimates on the fossilized teeth they discovered.

Megalodon reached lengths between 46 and 59 feet and weighed around 100 tones, making it one of the most powerful predator ever. For comparison, a mature contemporary great white shark is just 20 to 25 feet long and weighs around 3 tones.

Although the huge animal dominated the seas for roughly ten million years, scientists had little knowledge about why it went extinct. Fossils date back to both Miocene and Pleistocene Epoch. To find out when the animal died out, researchers from University of Zurich looked at 42 fossils that seemed to be the most recent ones. Each fossil in the database had one estimated upper and lower age.

Using a special statistical technique, the authors ran 10,000 simulations and looked at the gaps between the fossil’s ages. The data indicated that Megalodon went extinct approximately 2.6 million years ago. Six out of the 10,000 simulations indicated that the shark may be alive today, but that is nothing more than a crazy statistical chance. If you think that this would be a good intro to a horror movie, scientists said they have a definite answer: Megalodon doesn’t exist anymore.

The extinction coincides with another event. Around that time, whales started growing as huge as they are today and the reason may indeed be Megalodon’s extinction. Without the predator chasing them around, whales may have had the proper environment to develop.

Catalina Pimiento, the first author of a paper published in the journal PLoS ONE, said: “when we calculated the time of megalodon’s extinction, we noticed that the modern function and gigantic sizes of filter feeder whales became established around that time.” She added that “future research will investigate if megalodon’s extinction played a part in the evolution of these new classes of whales.”