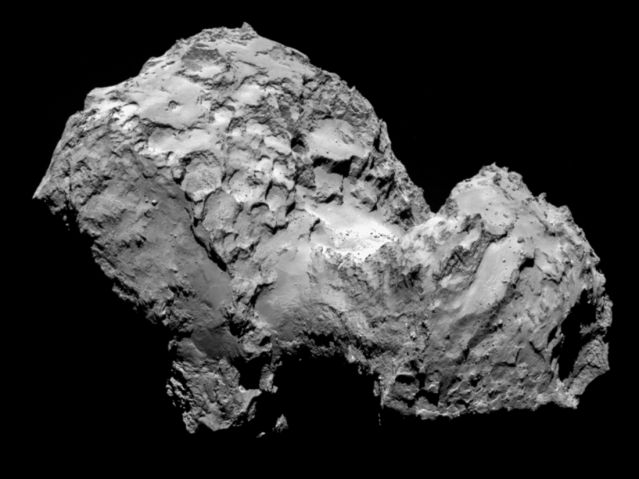 Scientists have finally answered one question that has apparently troubled many minds for some time now: What does a comet in space smell like?

Granted, it may not have been the first thing on your mind, however, researchers, with the help of a European spacecraft orbiting the 67P/Churyumov-Gerasimenko comet have determined what the odor of a comet may be.

Kathrin Altwegg, researcher at the University of Bern, Switzerland said. Altwegg runs an instrument dubbed ROSINA (Rosetta Orbiter Sensor for Ion and Neutral Analysis), and it’s because of this instrument that scientists could postulate this hypothesis.

According to recent information from the European Space Agency, the mix of chemicals in the comet’s inside causes it to smell (if it were possible to take a whiff of this comet) like horse urine and rotten eggs. In fact, the agency posted a complete rundown of all of the Comet’s molecules. These include water, carbon monoxide and dioxide, ammonia (NH3), methane (CH4), Methanol (CH3OH), formaldehyde (CH2O), Hydrogen sulphide (H2S), Hydrogen cyanide (HCN), Sulphur dioxide (SO2) and Carbon disulphide (CS2).

“It’s quite a smelly mixture,”

Altwegg told reporters, if someone were to visit the comet without wearing a spacesuit

“The perfume of 67P/C-G is quite strong, with the odour of rotten eggs (hydrogen sulphide), horse stable (ammonia), and the pungent, suffocating odour of formaldehyde. This is mixed with the faint, bitter, almond-like aroma of hydrogen cyanide. Add some whiff of alcohol (methanol) to this mixture, paired with the vinegar-like aroma of sulphur dioxide and a hint of the sweet aromatic scent of carbon disulphide, and you arrive at the ‘perfume’ of our comet.”

Altwegg was asked why scientists couldn’t determine that a comet smelled bad in the past.

“That’s mostly because we’ve never been that close to a comet,”

she answered, as the Rosetta mission has now come as close as five miles from the comet’s surface.

And this information isn’t just innocent fun for the team of scientists. The chemicals included in the comet’s composition can help researchers determine more about the formation of the comet and maybe our solar system.

“It’s a little smelly, but at the moment it’s a lot of fun to go to work every morning,”

67P/C-G is still more than 400 million kilometers away from the Sun, although closing in fast, but scientist believe that the more the comet approaches our solar system’s star, the more potent the “perfume” will be. In fact,  the closer it gets to the sun, the more volatile molecules will be released via sublimation.