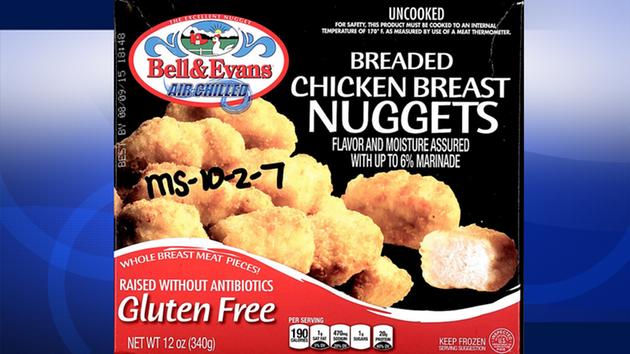 Murray’s Inc., the Pennsylvania packing company has been forced to recall approximately 32,000 pounds of gluten free chicken products for fear of a possible Staphylococcus contamination. The products, packaged under the name Bell & Evans have been recalled after a routine inspection conducted by the Colorado Department of Agriculture returned a worryingly positive result for enterotoxins of Staphylococcus.

The Affected products include breaded nuggets and breasts, which are products distributed nationwide.

Consequently, the U.S. Department of Agriculture’s Food Safety and Inspection Service recalled approximately 32,000 pounds of chicken. They announced that affected products have the established number “P-516”, a number found inside the USDA mark of inspection.

According to the recall instructions, all affected products are marked with a “Best By” date of August 9th 2015 as well as additional labels:

Until yesterday, no cases of food poisoning had been reported, however, authorities saw it necessary to issue a Class I recall to prevent any serious contamination cases.

Food poisoning following Staphylococcus Aureus infections is a quite troublesome gastrointestinal illness which presents with nausea, vomiting, stomach cramps and diarrhea. However, despite these disturbing symptoms, the infection is quick acting, not severe and resolves on its own in less than four days.

And although S. Aureus is a common bacteria, found in approximately 25% of healthy people, it does present a health risk when contaminating food, because it secretes distinct toxins which in turn can cause food poisoning. These toxins are heat resistant, which means that cooking does not destroy them.

Additionally, the USDA has also announced a Class I recall of 28,980 pounds of chicken products suspected to be infected with Salmonella Enteridis. Such recalls are issued when authorities have strong reasons to believe that the use of the products in question could cause serious, adverse health consequences or death. The recall addresses the Raw Stuffed Chicken Breast Breaded products sold by Antioch Farms, especially to consumers in Minnesota. The Boneless Breast of Chicken with Rib Meat “A La Kiev” is another product included in the Class I recall.

The frequency of contamination for chicken products with bacteria is quite problematic, especially considering the Americans’ love-story with poultry. In fact, in 2014, poultry consumption surpassed beef for the first time in 100 years.

Shoppers with questions can always contact Murray’s customer service at (717) 213-9361.