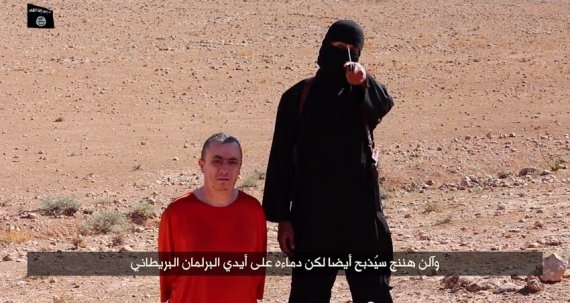 After the Islamic State warned westerners that they would kill Alan Henning in a video released last month, the extremist Sunni group has carried out their threat and released the video showing the murder of the British hostage.

Henning was a taxi driver and agreed to come to Syria to help in humanitarian missions as a driver. The 47-year-old was kidnapped last December, as he was driving a humanitarian aid truck in Syria. ISIS had shown images of him at the end of the video where another British hostage, David Haines, was murdered.

Now, a video showing the murder of Henning was released on the internet, making this the fourth murder or the “cancer” (as president Obama describes it) that is the Islamic State. Another hostage was shown in the video, identified as Peter Kassig, of American origin.

Prime Minister David Cameron spoke about the murder of Allan Henning and vowed to hunt down the killers of the British hostage and bring them to justice.

Muslim leaders had urged ISIS militants to allow Alan Henning to be released, however, on the eve of Eid Al-Adha, a Muslim festival that took place on Friday night, Henning was sadly killed.

“This reported murder is a despicable and offensive act, coming as it does on the eve of the Muslim festival of Eid Al-Adha. It is quite clear that the murderers of Alan Henning have no regard for Islam, or for the Muslims around the world who pleaded for his life. Alan was a friend of Muslims, and he will be mourned by Muslims.”

In the video showing Henning’s murder, Alan appears kneeling next to a man dressed in black and holding a knife. The video is one minute and 11-seconds long and is titled “Another Message to America and it Allies”. In what appears to be a statement that was pre-written, Alan Henning introduces himself and says:

“Because of our parliament’s decision to attack the Islamic State, I, as a member of the British public, will now pay the price for that decision.”

Shortly after, the Islamic State fighter is shown next to another hostage, identified as Peter Kassig, an American. The jihadist addresses the United States president and says:

“Obama, you have started your aerial bombardment in Sham (Syria), which keeps on striking our people. So it is only right that we continue to strike the necks of your people.”

The eyes of the world are now on the US-led coalition against ISIS, because, as it seems, each Western offensive is succeeded by another execution. Can such a trade be acceptable to Western leaders?