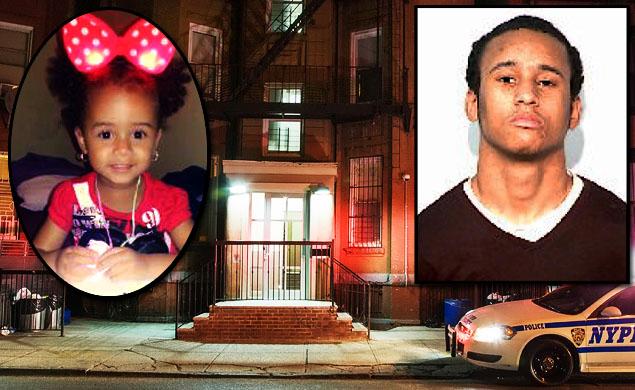 A helpless 3-year-old girl was beaten to death by her brutal Brooklyn babysitter on Saturday, after the girl went to the bathroom with her pants on, police says.

Police officers found the dying girl in a city homeless shelter at 38 Cooper Street after a 911 caller reported hearing screams echoing from the apartment.

The 3 year old girl, Jeida Torres, was transported to the Wyckoff Hospital, but doctors could not save her life. She was brutally beaten by her mother’s 20 year old boyfriend, who, according to police officers, “punched and choked” the tiny child. She finally died after suffering severe injuries to her head and body.

“She either pooped her pants or peed on herself, and he got agitated,”

Kelsey Smith, the man in question, fled the scene after assaulting the child, leaving defenseless and bleeding Jeida Torres behind with her battered big brother. The suspect already has a rap sheet, including 14 prior arrests dating back to 2008, for gang assault, robbery, grand larceny and even criminal mischief.

Police officers revealed that Jeida’s brother, 5, had also been beaten by Smith, although his injuries were most likely inflicted before Saturday. Neighbors told the police that the afternoon killing of Jeida capped off more than two weeks of violence, fighting and beatings inside the apartment.

Kimberly Torres, Jeida’s mother, was standing outside the building together with the girl’s grandfather, weeping after hearing what her boyfriend had done. She had left her two children in Smith’s company before going to work on Saturday and returned at home 30 minutes after the 911 call.

Smith was soon apprehended by authorities near the Queens border. The New York Police Department received an anonymous tip on the suspect’s whereabouts, who had attempted suicide but failed.

No charges have been filed yet in the brutal beating of the innocent girl.

Andrew Torres, 5,was placed in a police car and also brought to Wyckoff Hospital. He was in stable condition, despite the numerous bruises all over his face and upper body. The girl, however, was motionless when emergency medical teams arrived at the scene.

“I saw the paramedics run out with little girl wrapped in a blanket. Her hands were just hanging out … just limp.”

The police had been called at the scene on previous occasions, neighbors say, and the New York Police Department, the Administration for Children’s Services and the Department of Homeless Services were already investigating the family.