You are here: Home / National News / Bloodshed at Seattle School Minimized by an Unexpected Hero 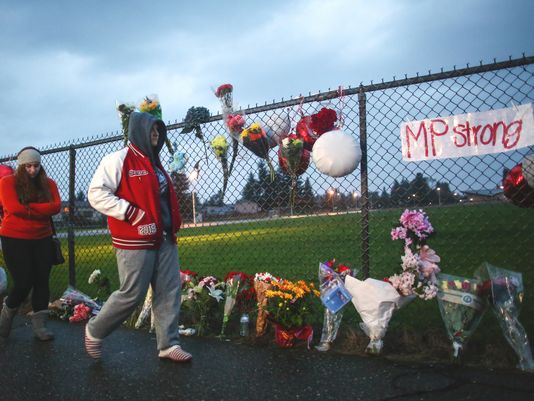 On Friday, a student opened fire in the cafeteria of Marysville-Pilchuck High School. The community of Seattle is still struggling to make sense of what happened. Four students have been hospitalized but they are not in critical danger. Doctors say that they will recover. A first-year social studies teacher rises as a hero in this story. Eye witnesses believe that she has managed to minimize bloodshed.

Despite being faced with an angry student holding a .40-caliber handgun, Megan Silberger decided to act. Eye witnesses say that she confronted the shooter.

“He tried either reloading or tried aiming at her. She tried moving his hand away and he tried shooting and shot himself in the neck. I believe she’s actually the real hero.” – Ereic Cervantes, a student

After a discussion with the teacher, Randy Davis, president of the Marysville Education Association, described her as a “classy first-year teacher with high enthusiasm”. Megan requested some privacy in light of recent events, but she did say that she isn’t even sure how she ended up confronting the armed student even if she is happy she did.

“I’m not even sure why Megan was in the cafeteria at the time. I think it was just a teacher going through, getting her lunch or coming from lunch. There’s two ways anybody could go in that situation. You can flee or you can go toward it. Obviously, we’re glad she did what she did, and thankful.” – Davis for the Seattle Times

The shooter was identified as Jaylen Fryberg, a 14-year-old student who was also a very popular football player and homecoming prince. Nobody knows what motivated Jaylen to fire on his class-mates, especially since he was well-liked by the community.

“What triggered him? That’s what we need to find out. Because from all we have determined, he was a happy-go-lucky, normal kid.” – Sen. John McCoy, member of the Tulalip Indian Reservation

Jaylen Fryber killed one student and wounded four others (including himself). All the victims suffered head wounds from the shooting and are currently recovering in the hospital. Nate Hatch, 14, (serious condition) and Andrew Fryberg, 15, (critical condition) are being treated at the Harborview Medical Center in Seattle. Shaylee Chucklenaskit and Gia Soriano (critical condition) are being treated at Providence Regional Medical Center Everett.

The school is planning to hold a community meeting for parents and students, to heal and move past the tragedy. School officials also declared that health counselors and specialists would be available for students and parents that are coping with the shooting.