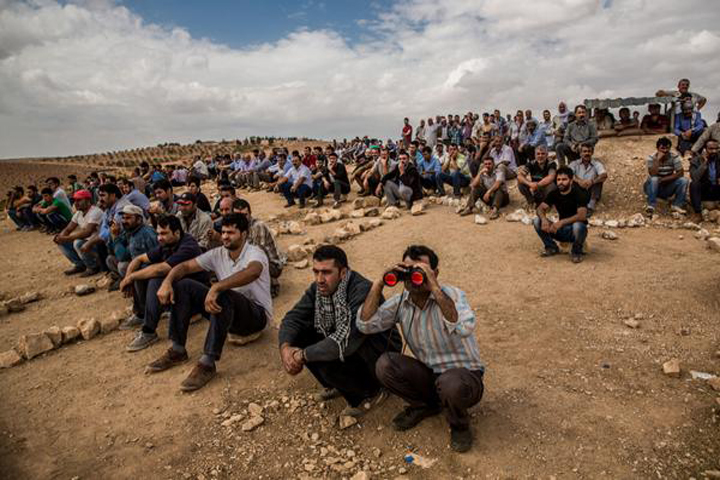 Eight people in eastern Syria lost their lives during an U.S.-led coalition airstrike targeting a gas distribution facility located in an Islamic State controlled Syrian town. The airstrike had targeted the distribution station located in Khasham, a town in the oil-rich province of Deir el-Zour and took place on Friday night according to activist’s accounts. The Deir el-Zour Free radio named four of the victims, also saying that four additional bodies had been taken to a nearby mosque. According to the activist’s collective, most of the slain man had been fuel tank drivers.

The Syrian Observatory for Human Rights, which relies on its network of activists all around Syria, had also reported the “long tongues of flames” that the airstrike caused.

Most of the U.S.-led airstrikes have been targeting the Islamic State extremists’ main source of income, which is represented by their oil facilities. Although targeting these oil facilities would significantly reduce the group’s revenue, the strikes come at a great cost: the lives of many civilians.

There was no comment by the U.S. military, which continued its airstrikes on other oil wells in the Deir el-Zour province, as activists report.

These recent coalition airstrikes have mostly focused the city of Ayn al-Arab, also known as Kobani, which has been the extremists’ main target. The border town would further reinforce the Sunni group’s influence over the Syrian territory it has seized.

During Friday attacks, Islamic State militants have begun shooting mortar rounds toward the border town of Kobani, even managing to bring shells over the Turkish border. These caused no damage, other than the wounded souls of the Kurds forced to hear how gun and mortar fire echoed across the border.

Kurdish forces trying to save the town have been helped by coalition airstrikes in the area, which have managed to stave off the group’s advance, but without more weapons and ammunition, they stand no chance of saving the town.

“Air strikes are not enough. It’s reduced ISIS, but it’s not enough to defeat them.”

Sadly, the Kurdish efforts of rearming have been hindered by Turkey which has long viewed the People’s Protection Units (the Kurds fighting in Kobani) with suspicion. Turkey has also insisted that the U.S.-led coalition extend their involvement against ISIS by also aiding Syrian rebels, who have to battle not just the Islamic State but also the Syrian President, Bashar Assad.