You are here: Home / National News / 19 People Under Arrest After Night of Protests in Hong Kong 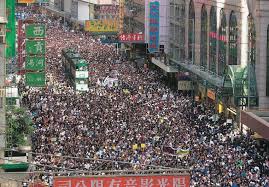 Hong Kong law enforcement agencies were accused of having used organized crime gangs to stir up pro-democracy protests taking place on the streets of the city. On Saturday, security chief Lai Tung-Kwok said that such rumors weren’t founded.

After a night of violence plaguing the city of Hong Kong, 19 people were arrested by authorities, who were attempting to drive citizens from the streets due to clashes between pro-democracy protesters and mobs.

According to local media, the clashes resulted in at least 18 injuries, including police officers.

After negotiators had managed to organize discussions between student protesters and government representatives, on Friday, the talks were called off because of the violent clashes. The Hong Kong Federation of Students claim that authorities failed to do their job when they did not intervene in the organized attacks against protesters. A protest site in Mong Kok was attacked by hundreds of Communist Party supporters who destroyed tents and tore down banners.

Hong Kong was almost paralyzed last week after tens of thousands of protesters occupied some of its biggest streets. Business activities and traffic were stifled as demonstrators demanded that China allow democratic elections to take place in 2017. They also want the resignation fo Leung Chun-ying, Hong Kong’s Chief Executive, who is also a big supporter of Beijing interests.

Leung told reporters that he had arranged his chief secretary to meet with protesters and resolve the political crisis, which has become the largest unrest in Hong Kong since 1997 when Beijing took control of the former British colony.

Last Sunday, police officers used tear gas and pepper spray to disperse protesters in the Mong Kok district. On Friday, the police was forced yet again to intervene as street fights broke out. A human chain was formed between officers in the attempt of separating the two groups, however, the barrier didn’t hold and reinforcements had to be sent in.

“We don’t know if there is any sort of organization to why they are here, or if they just heard something on TV and all came running and have just had enough and have been waiting for this opportunity to express how angry they are about this democracy movement,”

The protests have been declared as illegal by the Chinese Communist Party and described them as civil disobedience which will surely fail. In a newspaper editorial which generally reflects the Communist Party’s views, greater democratic reforms. There is apparently no room for concessions.