You are here: Home / Tech & Science / Volcano Tornadoes Filmed for the First Time in Iceland 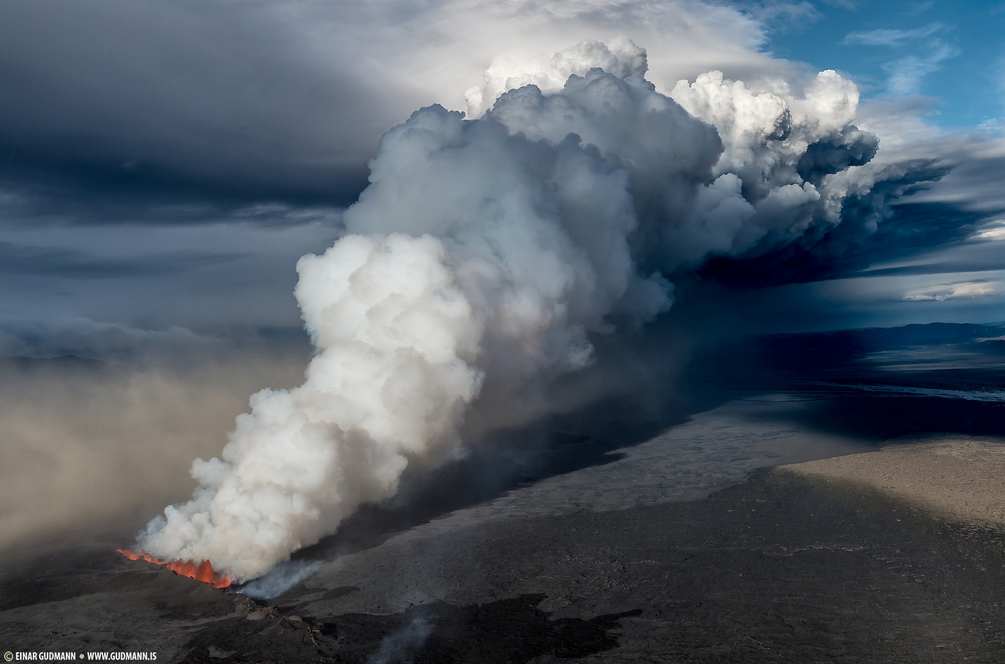 If you thought death by lava was terrifying wait ’till you see what Iceland has in store for us. Last week, the country’s stormy, cold weather combined with a smoldering volcanic eruption gave birth to an even more terrifying way to die in volcanoes: the volcano tornado. On September 4, two new lava-spouting fissures emerged in Iceland. They are visible from space. The lava erupted from the volcano one day later, at the north of Dyngjujokull glacier. This valley appeared a few days earlier, as the ground moved to accommodate magma from the older Holuhraun eruption to the north.

It was in this exact same spot that toxic tornadoes were spotted. They were surrounded by a poisonus cloud of sulfur dioxide gas that was rising from the Holuhraun lava flow. One of the tornadoes had a column that stretched more than one kilometer into the air. The incredible whirlwinds were filmed with an infrared camera.

“We haven’t seen anything like this before. I was quite surprised to see it.” – Fred Prata, chief technology officer at Nicarnica Aviation in Kjeller, Norway

At the moment, Nicarnica’s infrared camera tracks ash clouds from aircrafts, but it is also being ground-tested for Iceland’s Future Volc project. The Future Volc project is an international collaboration that will monitor Europe’s natural hazards.

Specialists believe that the spinning ribbons were actually sulfur dioxide gas, similar to Fire tornadoes (firenadoes). A tornado that is born within a volcano, or from a fire is an entirely different story than a tornado spawned by thunderstorms.

‘Normal’ tornadoes require wind shear, colliding cool, moist air near the ground and dry air fonts to be born. However, fire and volcano tornadoes rise from ground level and reach to the sky. In this scenario, super-heated dry air begins to spin faster and faster until it creates a column.

The Icelandic Met Office advised caution but it referred to volcano tornadoes as “wind anomalies from thermal convection”. On September 1, tourists were arrested for venturing too close to the ‘hazard’ zone and scientist were also advised to stay away from the lava field in the same day that the volcano tornadoes emerged.

Ignoring the risks, Einar Gudmann, a professional photographer, ventured near the volcano and caught stills of the volcano tornadoes. Iceland’s 2014 eruption started on August 28, north of Bardarbunga volcano. At the moment, the basalt laval flow is moving through the Jokulsa a Fjollum River. The channel was not blocked, but the lava now covers 7.3 square miles.