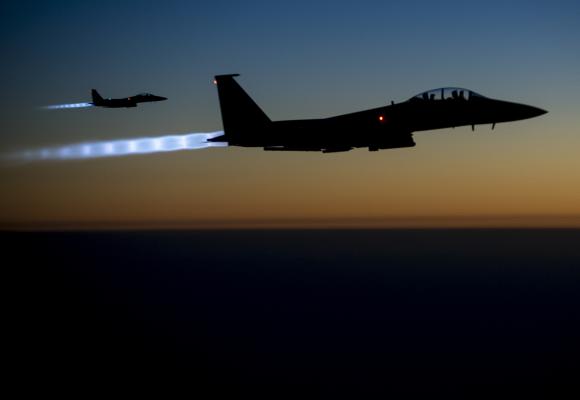 According to a group monitoring the ISIS crisis, U.S.-led airstrikes hit several targets in Islamic State controlled territory in Syria (including grain silos).

The Syrian Observatory for Human Rights suggested that U.S. aircrafts might have mistaken the mills and grain silos for Islamic State bases in the northern Syrian town of Manbij. Washington hasn’t commented on the situation yet.

The United States military has been conducting airstrikes regularly, since last week, with the help of Arab allies in Syria and since August in Iraq. Rami Abdulrahman, who leads the Syrian Observatory, claims that the Manbij strikes have only claimed civilian lives.

“These were the workers at the silos. They provide food for the people,” Abdulrahman said.

He was not able to provide an accurate number of casualties as the Observatory (which gathers information concerning the conflict in Syria) couldn’t verify the information.

Manbij is located between Aleppo city and Kobani. Islamic State fighters have been attempting to capture the city of Kobani, sitting at the northern border with Turkey, for several weeks now. They have displaced hundreds of thousands of Syrian Kurds in the process. Syrian refugees were forced to flee into neighboring Turkey, where the Turkish army could just watch as battles were raging on just yards from the frontier and prevent Turkish Kurds from crossing the border into Syria.

Raids in Aleppo were conducted by Syria’s army, which targeted areas east of the city with bombs and other projectiles. Other raids were carried out in Hama, located in western Syria.

In the meantime, United States-led forces began an offensive in eastern Syria, where a gas plant controlled by the Islamic State was bombed. Several Islamic State fighters were wounded at the plant located in Deir al-Zor, the Observatory said.

According to U.S. officials, other strikes will follow as the U.S. army is attempting to target oil facilities that represent an important source of revenue for ISIS.