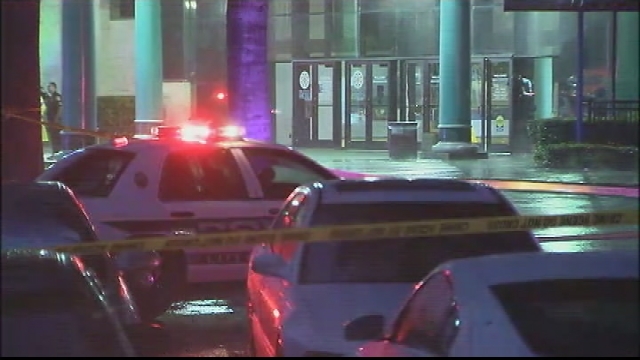 Authorities are trying to determine whether two men found dead in a crashed vehicle were somehow connected to the Kissimmee mall shooting that resulted in the wounding of two people.

Kissimmee police officers responded to gunshots that were fired near the Ross Dress for Less store at the Osceola Square Mall’s around 6:15 PM. According to authorities, the injuries of the two victims weren’t life-threatening. Kissimmee police spokespeople declined to immediately name the victims.

According to Stacie Miller, Kissimmee police spokeswoman, the shooting followed a verbal argument in the store. The two victims were at a different mall entrance when they were shot. They were unarmed. Police isn’t yet clear on whether the shooting suspects had been in the mall or in the parking lot when the gunshots were fired.

Just as police officers were heading to the store, a vehicle matching the description of the car in which the two dead men were found, headed toward them. As they began following the car, police officers soon found that it had crashed in a head-on collision into another car.

Spokeswoman Miller told reporters that the two men had died from what seemed to be crash-related injuries. Luckily, the driver of the other vehicle, while injured, was stable, and his injuries weren’t life threatening, according to paramedics who arrived at the scene.

However, the Kissimmee police department hasn’t yet connected the two men in the crashed vehicle to the mall shooting. According to Miller, that’s still a puzzle.

The Police spokeswoman added that the crash investigation would be taken over by the Florida Highway Patrol, who will be responsible for identifying the dead men. Afterwards, the police will determine if they were the mall shooters by conducting a photo line-up with the victims of the shooting.

Both the mall and the Ross store remained open to customers later that evening, even as police continued to process the area.