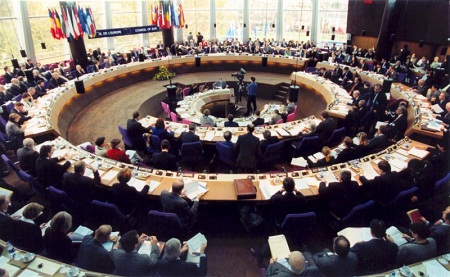 A memorandum has been created by Kiev together with self-defense forces, attempting to finally and effectively put an end to the battle in eastern Ukraine. After peace talks in Minsk, the memorandum not only creates a buffer zone, but also requests a retreat of troops and bans any military aviation flights over the area.

According to Leonid Kuchma, former Ukrainian president, the signed memorandum contains nine points. First and foremost, the memorandum bans the use of weapons by all sides involved. Second of all, new formations of units and military bases are banned, as is the use of weapons and offensive action against one and other.

There is a specific buffer zone outlined in the agreement, of around 30 kilometers, aside from the other bans and requests. All military aircrafts are prohibited from flying over regions of eastern Ukraine. OSCE aerial vehicles are an exception to this rule.

Additionally, Ukrainian troops must begin pulling back their heavy artillery 15 kilometers away from the conflict zone. As with artillery, foreign mercenaries are also to be withdrawn by both sides. According to former president Kuchma, both sides had agreed not only to the withdrawal of mercenaries but also to the continued exchange of prisoners.

Overseeing this transition period and making sure that both sides will be adhering to the memorandum requirements, OSCE has been tasked to monitor the action.

Along the entire ceasefire area, observers from the organization will be assessing the situation and reporting back to superiors. Lugansk People’s Republic representative, Aleksey Karyakin, told reporters that around 500 OSCE observers will arrive in the area to monitor the ceasefire.

During the ceasefire negotiations, Russian representatives were also present.

On Saturday morning, a third convoy consisting of humanitarian aid crossed the Russia-Ukraine border. Around 200 vehicles carrying aid for residents have made their way to the southeastern cities of Ukraine.

In the meantime, Aleksandr Zakharchenko, the prime-minister of the self-proclaimed Donetsk People’s Republic, noted that there wouldn’t be any Ukrainian elections in Donetsk, as the September 5th Minsk protocol had requested. Donetsk and Lugansk were given special status and Zakharchenko claimed that this status represents a declaration of independence for the two republics.

The memorandum represents the result of the ceasefire agreement that was signed on September 5th, in which several peace solutions had been negotiated by Petro Poroshenko, the Ukrainian president, together with representatives from both the Donetsk and Lugansk republics.