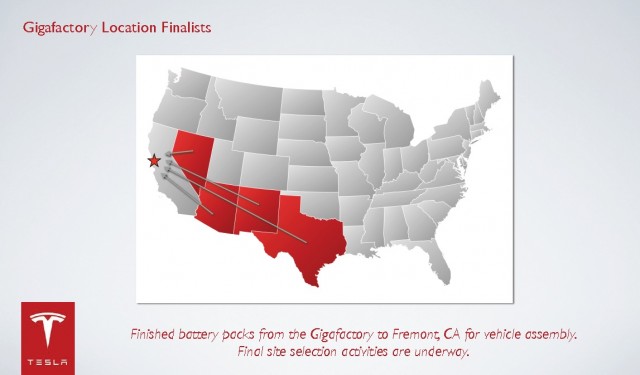 Elon Musk may right now be America’s favorite high-tech entrepreneur. States are competing with each other to gain the right of hosting any of Musk’s future investments. An example of such a competition is reflected by the struggle to host the launch site of SpaceX, which was eventually won by Texas.

Tesla Motors produced critically acclaimed automobiles. The electrical car is not only environment friendly. According to tests ran by National Highway Traffic Safety Administration, Tesla Model S is the safest cars ever build. So this great car runs on batteries and Elon Musk decided to choose a state where a battery factory will be constructed.

Several states competed with each other to offer the best offer for Musk’s next project. While it seems that Nevada won the race, Tesla Motors is the real winner. The state of Nevada decided to offer a risky deal. For the next 20 years, Tesla Motor will pay $1.25 billion less in taxes. Musk declared initially that $500 million worth of tax breaks would be enough to attract the investment.

However, the deal forces Tesla to invest at least $3.5 billion in Nevada, in both equipment and real estate. The state officials expect an overall investment of around $10 billion in the next 20 years. To put things in perspective, Nevada offered tax breaks to another high-tech company, Apple. But Nevada offered Apple a tax break of ‘only’ 89 million.

The state officials are very enthusiastic about the deal and optimistic regarding the economic future of the state. “What this can do for the region… It will allow every under employed person to reach full employment,” declared Steve Hill, the governor’s economic development director. “It will lift up everyone in the region. Property values will go up. The prosperity of the region will be materially changed.”

Gigafactory deserves its name. In the next 20 years, the battery factory will generate an economic impact of $100 billion. The project is so gargantuan that by 2020 it will employ around 6500 workers and could help create a total of 22.000 indirect jobs. The workforce will enjoy an average wage of $25 an hour.

One of the most important reasons why Tesla Motors chose Nevada is the sales tax break. Tesla Motors will enjoy 100 percent sales tax break over the next 20 years. One of the only required financial contribution for Tesla will be a yearly $7.5 million for education, because the tax breaks will directly affect this state’s sector.