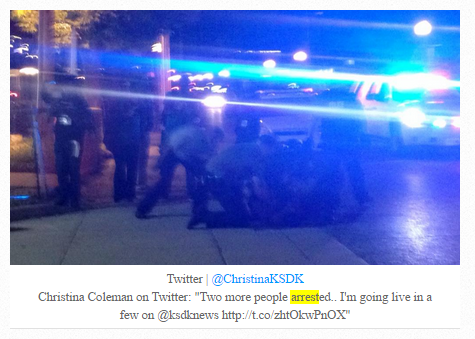 A Ferguson police officer was shot in the arm on Saturday night by an unidentified assailant. The shooting happened while the male officer was doing his routine check of the Community center. Tim Zoll, from the Ferguson police, declared that the officer was transported to the Barnes Jewish hospital. He is injured, but not in mortal danger. On Sunday, he was released from the hospital and sent home.

Initially, St. Louis County Police Chief, Jon Belarm, thought that there are two suspects in the shooting, but he later came to the conclusion that there was only one assailant. Ferguson has already been under the international radar for far too long, after the shooting of a black teen by a police officer. According to Belmar, the shooting happened at the same time with two separate protests for Michael Brown’s death. However, it seems that the shooting and protests are unrelated.

The assailant, armed with a handgun, fired several rounds at the officer during the pursuit, but he only hit the arm. The good news is that after the Michael Brown shooting Ferguson police have been equipped with body cameras. The bad news is that the body camera wasn’t shooting when the shooting happened.

The suspect was then seen fleeing the area and running towards a wooded region behind the community center. After 90 minutes of continuous searching, the police failed to apprehend the suspect. Meanwhile, protests for Brown’s shooting continued. It seems that no matter what Gov. Nixon does, he cannot solve this situation. He received thousands of emails, letters and phone-calls in the past two months. The documents display public outrage. Many people blame Gov. Nixon while others believe he did not do enough to support the police.

“There aren’t a lot of ways to deal with shootings of this nature, conduct of this nature, that don’t touch a lot of very emotional, value-laden positions that Missourians hold.” – Gov. Nixon

Many believe that there is literally no action that Nixon can take in this situation. Meanwhile, protests continue to rage on the street, and as a result, 7 people were arrested this weekend. Eric Morris, assistant communications professor at Missouri State University, believes that the governor’s ‘vigorous prosecution’ is indicative of his challenges when trying to communicate with people who have completely opposite perceptions of the police.