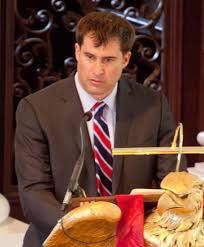 Seth Moulton, the Democrat newcomer, has set his sights on RIchard Tisei’s spot in the 6th Congressional District after his stunning victory in the bitter primary contest against U.S. Rep. John Tierney.  It’s the first time that a sitting Massachusetts congressman lost a primary since 1992. At that time, Democrat Chester Atkins lost to the former U.S. Rep. Marty Meehan.

Seth Moulton has served the United States as a Marine and is an Iraq war veteran for Salem. He will face Richard Tisei in November and is confident about his Tuesday win, explaining that many of the votes for him were based on the fact that voters are frustrated with Congress.

According to Moulton, a new approach is needed in Washington and he believes that Republicans aren’t the only ones responsible for the clear lack of progress.  He also suggested that Tierney had been ineffective in Congress.

Tierney, on the other hand, spoke proudly of his amazing 18-year run in office.

Tierney is the first Democrat to lose his primary this year, and is the fourth House Incumbent to do so, after Republican Reps. Kerry Bentivolio (Michigan), Eric Cantor (Virginia) and former majority leader Ralph Hall (Texas).

During the campaign, Tierney focused solely on Tisei, until late in the primary, when he suddenly launched a campaign add suggesting that Moulton was linked to Republicans who were in support of gun rights and in opposition of abortion rights. The add also focused on Moulton’s money in the campaign, money that he had received from White Mountain PAC, a society also affiliated with former U.S. Senator Judd Gregg.

In response to the ad, Moulton only stated that it proved that Tierney now considered him a worthy opponent.

According to Moulton, his chances of holding off Tisei were stronger after the former state senator lost to Tierney during the 2012 election.

He added that he brings a new perspective to office and that he looks forward to contrasting his vision with that of Tisei. “We won’t get fresh thinking and new leadership by sending someone to Washington who was first elected to office when I was 6 years old.”, Moulton said.

Moulton graduated from Harvard University and enlisted in the Marines in 2001. Now that the situation is so tense in Iraq, Moulton also shared his viewpoint regarding the ground war in Iraq, expressing his clear opposition, now that President Barack Obama faces the difficult decision of how the U.S. needs to fight the Islamic State extremists.