You are here: Home / National News / Quick Strike Force for Ukraine on the Verge of Creation

During the NATO summit that is taking place in Wales this week, President Barack Obama and other allied leaders will be discussing the creation of a quick-strike force of several thousand troops as a response to Russia’s aggression in Ukraine.

Anders Fogh Rasmussen, NATO Secretary General, told reporters that the new created quick-strike unit will represent a “Readiness Action Plan” whose sole purpose is to respond to any aggressive behavior that Russia might have. According to Rasmussen, this strike force will properly equip the alliance so that whatever arises, they can immediately respond to any security challenges. 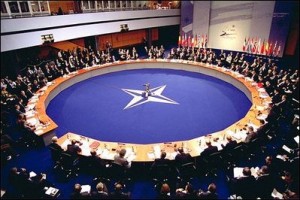 The NATO Secretary General sadly agreed with reporters that the NATO summit that had been originally scheduled to discuss matters in Afghanistan will now be focusing on the crisis in Ukraine. On Thursday and Friday, the leaders of 28 member nations will be gathering in Newport on the southern coast of Wales.

Rasmussen added that the alliance would be forcing what he would describe as a spearhead in their Response Force. One that has the readiness to be deployed instantly, right as threats occur.

“This spearhead would be provided by Allies in rotation and could include several thousand troops ready to respond where needed with air, sea and Special Forces support,” Rasmussen told reporters at the NATO headquarters in Brussels.

This new response force would require infrastructural support- such as reception facilities on territories of NATO member states and pre-positioned supplies and weapons. Rasmussen also noted that logistics experts, command and control officers will also be required. In his view, this strike force has to be able to immediately move from one place to another (“travel light”, in Rasmussen’s words) while striking hard if necessary.

When reporters asked Rasmussen what “short notice” meant, he explained that all the details of deployment should be worked out during this NATO summit but that he believes that it will be a matter of days in which the strike force should be able to act.

Rasmussen ended by assuring reporters that NATO’s presence in Eastern Europe would become more visible in the future.

At the same time, President Obama as well as other member countries will be weighing infrastructural upgrades that might be required in regions that are located east of Russia. They don’t exclude the necessity of airfields, ports and other such upgrades that might support reinforcements if troops require them.

Last but not least, Rasmussen warned the public that being naïve is a luxury the world doesn’t have- Russia considers NATO an adversary and consequently, the alliance must adapt to that reality.