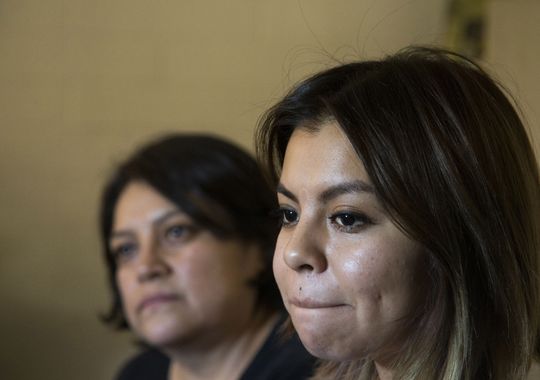 Marlene Vazquez (right) and her Mother. Marlene received deferred action from deportation (under the President’s program).

Immigrants are eager to find out information of how President Barack Obama plans to deal with the undocumented immigrants that are being deported. On Friday, Obama promised that action was coming soon, but no change was recorded, and it is already Sunday. Immigrants are frustrated, they actually feel betrayed because Obama refuses to use his executive powers in this case.

“President Barack Obama has just announced that he will not take any executive actions on immigration until after November elections.” – “Breaking News” labeled post by immigrant activist

Beatriz Esquivel is one of the many immigrants whose dreams were smashed this week. The woman of 41-years is originally from Mexico City but she has lived in the U.S. illegally for the las 20 years. She has crossed borders in January 1994 with her daughter, who was 2-years-old at the time. At the moment, her daugher, Marlene, has received protection from deportation according to Obama’s 2012 Deferred Action for Childhood Arrivals program. Beatriz was hoping that the program would extend to parents as well. This way she could work legally and maybe return to school. At the moment, she cleans houses for a living. Beatriz and millions of other undocumented immigrants feel like political volleyballs.

“I feel like I am caught in a political game. It’s like a game of volleyball… I’ve been counting the days. What’s going to happen. This is a huge frustration. He keeps saying he is going to do something, but we keep waiting and waiting.” – Beatriz declared

Social media channels ‘lit up’ after the announcement of delayed action. Some immigrant advocates accused the president of putting political games ahead of the lives of undocumented immigrants, while others consider that they were “thrown under the bus by Obama”. Either way, immigrants feel frustrated and betrayed.

It was not so long ago that Obama promised to take independent action by the end of summer, after the House of Republicans did not accept a bipartisan immigration bill passed by the Senate. It is already September, and millions of undocumented immigrants like Esquivel are still expecting a miracle from the president.

Obama is under intense pressure from fellow Democrats, who believe that a decision in the immigrant situation might fuel a backlash from Republicans. On the bright side, the president still plans to use his executive authority to “take significant steps to reform our broken immigration system.” The only question that remains is when he is actually planning to do that. Apparently, “extreme politicization” has pressured the president to delay his decision until the end of the year.

“The White House’s decision to delay executive action on immigration until after the election is an open admission that the president intends to take actions that the majority of Americans oppose.” – Lamar Smith, R-Texas (opponent of immigration reform)