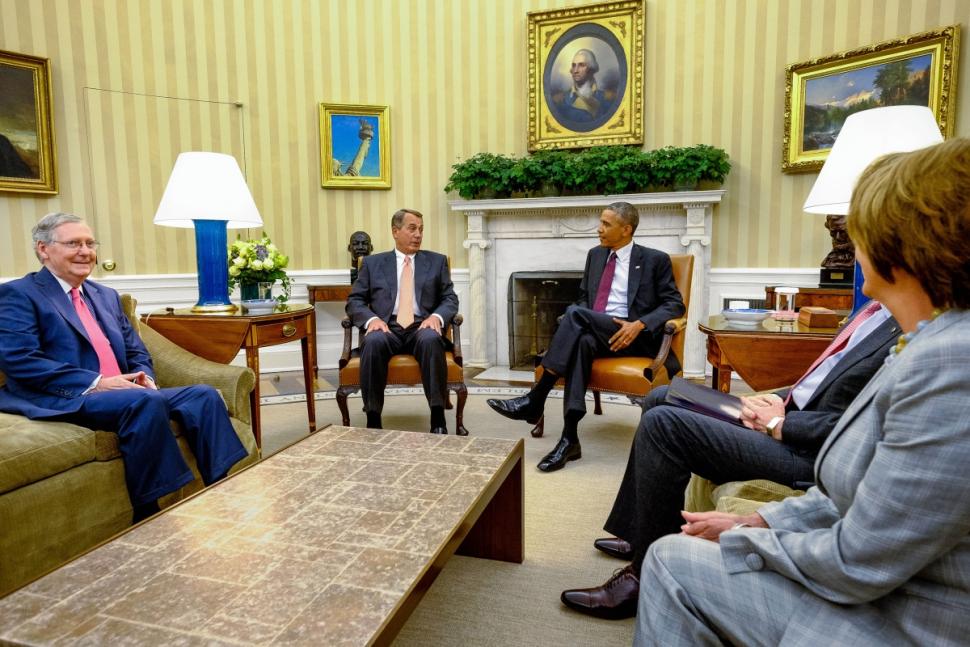 President Obama met with the top four party members from Congress to discuss the latest military matters. Obama claims he has enough authority to act against the Islamic State, which in the White House statement was called ‘ISIL’. Senate Majority Leader, Harry Reid, declared they were briefly informed on the Wednesday presidential speech.

“The President told the Leaders that he has the authority he needs to take action against ISIL in accordance with the mission he will lay out in his address tomorrow night,” the White House stated. “He reiterated his belief that the nation is stronger and our efforts more effective when the President and Congress work together to combat a national security threat like ISIL.“

The meeting took place just a day before Obama will announce the mission and plan against the Islamic State. The address will take place at 9 PM on Wednesday.

Obama intends to arm the Syrian opposition in an attempt to counter the Islamic State’s forces. The president asked the Congress for $500 million specifically for these troops opposing Syrian President Bashar Assad. He is expected to ask for and receive an authorization for the tactical move from the Congress, but Obama claims enough authority to follow a larger plan without congressional consent. The president counts on the urgency of the issue as a legitimation of his intentions. Congressional approval might be difficult to obtain before the midterm elections in November.

One of the main topics of Obama’s electoral discourse was the retreat of military forces and actions from the region. So addressing the Americans on the next military intervention in the Middle East just hours before 9/11 is a radically different approach. His strategy seems to rely on sponsoring the local opposition, combined with airstrikes, meaning that there will be no ground troops deployed by the U.S. Army. The U.S. launched airstrikes against ISIS for over a month now. The new plan will probably reveal extended operations.

While there is little congressional consensus on how Obama should act, sources say that John Boehner supports Obama’s vision. Moreover, he would even agree to send out military personnel to train the local Iraqi troops. Highly trained local troops would have a higher chance of eliminating the Islamic State leaders. The Congress is split on the matter, with many members preferring to avoid a decisive vote, due to the approaching mid-term elections.