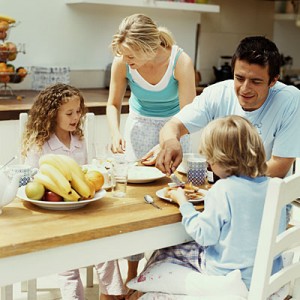 A new study found that regular family meals can protect against the negative effects of Cyberbullying in teenagers.

Enough is Enough is an organization that seeks to increase internet safety for families and children. According to them, 43% of teenagers with ages between 13 and 17 have experienced some sort of Cyberbullying in the past year. Cyberbullying can have serious implications for teens; recent studies have shown that Cyberbullying can trigger anxiety, suicidal thoughts and depression in teens.

This new study was led by Frank Elgar, a professor in the Department of Psychiatry at McGill University’s Faculty of Medicine in Canada. The study was published in the JAMA Pediatrics.

With this study, Professor Elgar wanted to determine if the frequency of family meals had any influence on the effects of Cyberbullying on the teenager’s mental health. For the study, the researchers observed 20,386 teenagers from Winsonsin, US. Elgar stated:

Many adolescents use social media, and online harassment and abuse are difficult for parents and educators to monitor, so it is critical to identify protective factors for youths who are exposed to Cyberbullying.

The teenagers who were exposed to Cyberbullying and those who were bullied face-to-face were questioned by researchers to see how these two forms of bullying impacted several forms of mental health outcomes, such as anxiety, self-harm, suicidal thoughts and depression.  The researchers also collected information on the teen’s regularity of family meals.

What Elgar’s team found was that the teens that were experiencing Cyberbullying were around three times more likely to have problems (emotional and behavioral) than those who experienced face-to-face bullying. It was also found that these issues were more common in teens that had fewer or no family meals.

The researchers concluded that regular family meals may protect against the harmful effects of Cyberbullying because of the communication and family contact that family meals involve.

We do not want to oversimplify what we observed. Many adolescents do not have regular family meals but receive support in other ways, like shared breakfasts, or the morning school run.

What can be concluded is that parental involvement in a teenager’s life and some type of online supervision could really prevent or reduce Cyberbullying.

Did you know that 1 in 6 parents know that their child has been bullied on a social networking site? Has your child ever been bullied? Care to share your thoughts on this news in the comment section below?