You are here: Home / Tech & Science / The Milky Way Rests in the Laniakea Supercluster of Galaxies 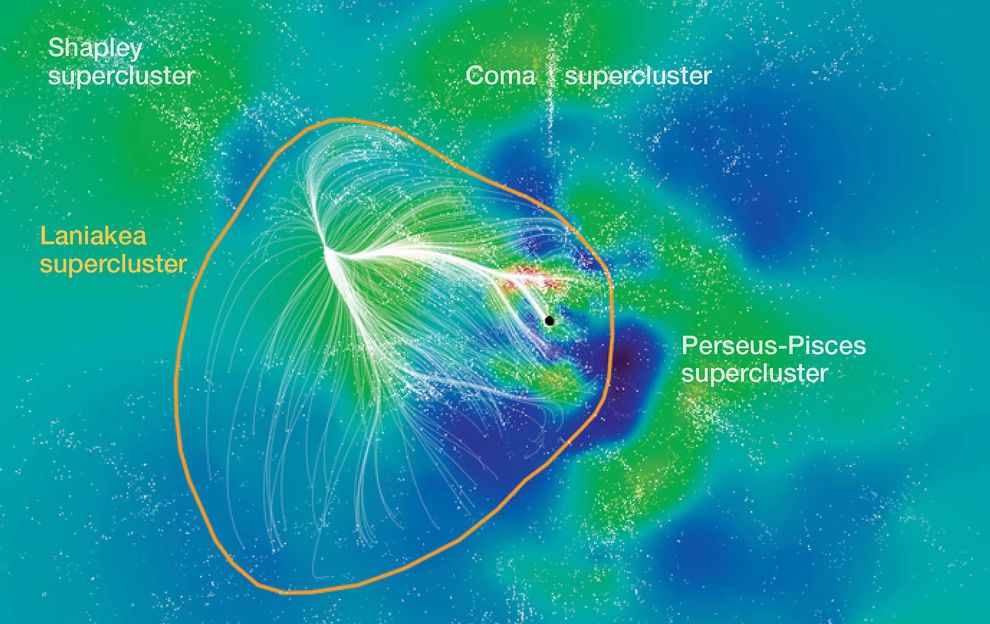 A group of scientists conducted by University of Hawaii in Honolulu astronomer Brent Tully, has mapped the exact location of the Milky Way galaxy that reportedly rests in what astronomers call a supercluster of galaxies. This is the first time scientists have succeeded in creating a map that combines more than 8,000 galaxies as part of an effort to understand where our galaxy fits in the universe.

It appears that that our Milky Way resides on the outskirts of a massive, previously unknown galaxy super-cluster scientists have named Laniakea, which is Hawaiian for “immeasurable heaven.”

The finding, reported in this week’s issue of the journal Nature, is a result of a new mapping technique that combines not only the distances between more than 8,000 nearby galaxies, but also their motion as the universe expands and galaxies are pulled through space by gravity. This technique enables astronomers for the first time to clearly delineate where one super-cluster of galaxies ends and another begins.

Laniakea hosts roughly 100,000 galaxies and within it, there are filaments and sheets of galaxies separated by voids, which mimics the structure of the universe on the largest scales.

The researchers note that over time Laniakea, like other components of the cosmic web, will dissipate with the accelerated expansion of the universe from the influence of dark energy.

The super-cluster spans some 520 million light-years in diameter. One light-year is the distance that light, which moves at about 186,000 miles per second travels in one year, or roughly 5.88 trillion miles.

“Seeing a map gives you a sense of place,” says Tully. “For me, having that sense of place and seeing the relationship of things is very important in terms of understanding it.”

Previous Milky Way maps couldn’t identify which galaxies were bound together by gravity to form the Milky Way’s supercluster. UH scientists have found Laniakea’s boundaries and galactic inhabitants by looking at how galaxies move through space.

The team used a measurement called peculiar motion, which takes a galaxy’s total movement and then subtracts the motion contributed by the expansion of the universe. From there, scientists can generate flow lines that indicate how galaxies are moving, revealing the gravitational center that is drawing them in. These attractors control the behavior of member galaxies, forming the cores of superclusters.

This new map was published in the journal Nature on Thursday, September 4.