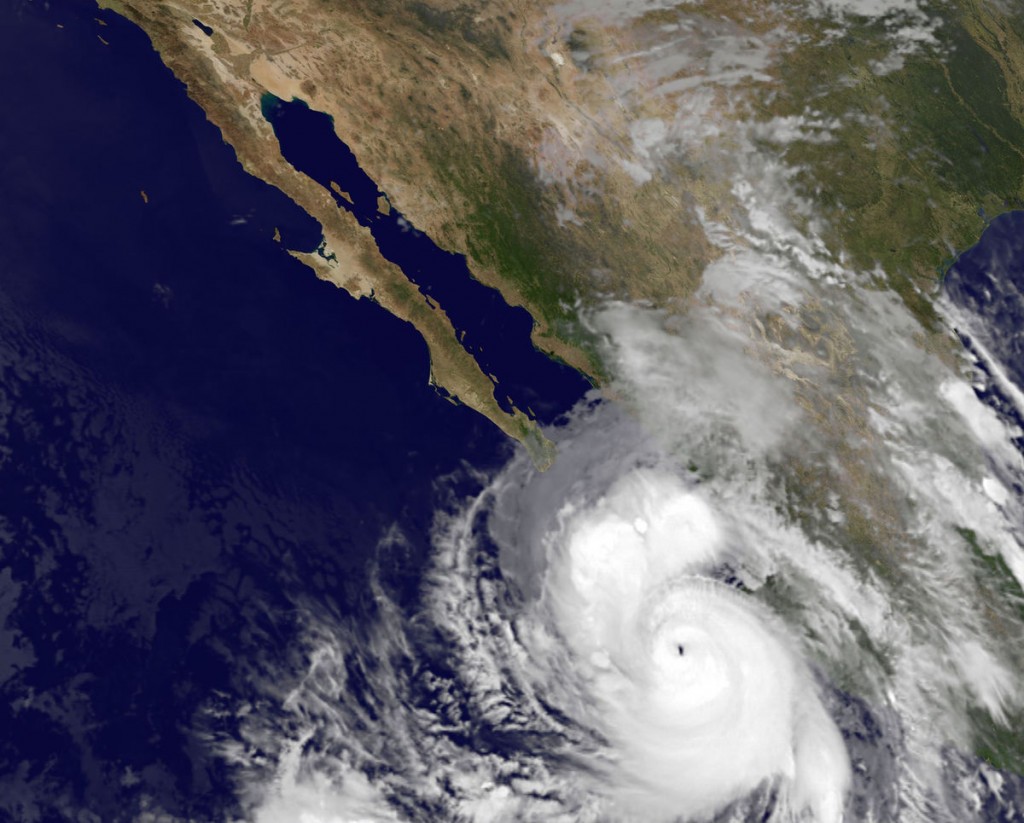 Hurricane Odile bore down on the coastline this week. This prompted red alert in Mexico’s Baja California. The Cabo San Lucas resort also received a red alert, because the major hurricane is threatening to result in flooding, high winds, heavy rains and a “dangerous” storm surge. At the moment, Odile is a category-3 storm according to the five-step Saffir-Simpson scale. It had top winds of 125 miles per hour. It was 30 miles southeast of the southernmost part of the Baja California region at 10 p.m. (Mexico City time) on September 14, declared the U.S. National Hurricane Center in an advisory.

“It is coming in at a pretty near perfect path for really slamming Cabo San Lucas” – Steve Wistar, meteorolgist at AccuWeather Inc.

At present, Odile is considered a “dangerous hurricane” by the center and based on this, the red alert was prompted along the coastline and the mainland. The country is preparing to celebrate its Independence Day, and this might bring many people to the coastline.

Roughly 18 flights (approximately 30%) of everything coming in and out of Los Cabos International Airport has been canceled due to weather conditions, said FlightAware, a Huston-based airline tracking company.

“A dangerous storm surge is expected to produce significant coastal flooding (..) The surge will be accompanied by large and destructive waves.” – the advisory

The Hurricane warning was issued from Punta Abreojos to Loreto, but the eye of the storm might hit only near Cabo San Lucas instead of passing offshore to the West. Reports say that the hurricane’s strongest part will also be at the Eastern edge of the eyewall. This conclusion is based on the theory that tropical systems in the northern hemisphere spin counter-clockwise. If you add the forward motion of the storm, you will see that the northeast side of it is the most powerful.

Odile’s winds reach 50 miles from its center, and the tropical-storm strength is over 205 miles. It is currently a category-3 storm but it was downgraded from a category-4.

Residents are urged to leave their homes if it doesn’t feel safe and remember the route to a temporary shelter in case disaster strikes or if they want to take their leave later. People who do not want leave their homes should remain indoors.

A category-3 storm has the power to damage buildings, and block roads by uprooting trees. Along with the storm surge, the hurricane-force winds (of roughly 74 mph) will also rake the peninsula, and the mainland with 39mph.

Weather forecasts for Baja California Sur include heavy rains and strong winds. Apparently, Colima, Jalisco, and western Michoacan might receive between 9 and 10 inches of rain, with isolated cases that will receive even more. Odile will downgrade to a depression (the weakest form of tropical system) by the end of the week.