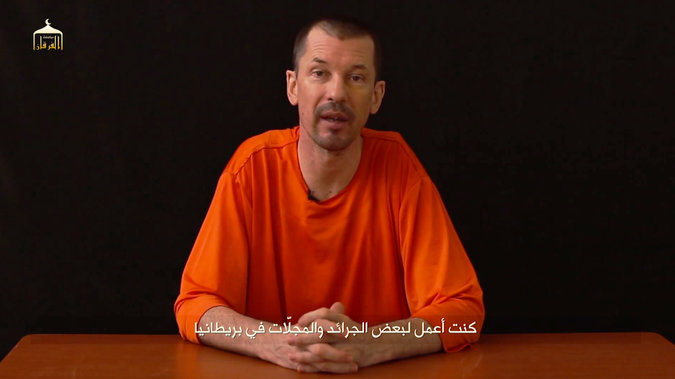 Stepping away from what the Islamic State has been releasing recently (mainly videos of beheadings ), on Thursday they released another video, this time of British Journalist John Cantlie, entitled “Lend Me Your Years”. The imprisoned journalist is shown standing behind a desk while explaining to the public that the American and British governments, together with their allies are going to involve countless lives into another unwinnable war that will end similarly to how the Afghanistan and Iraq wars did.

The video has Arabic subtitles and shows Cantlie wearing an orange T-shirt apparently reading a script. During the 3 minute video, the journalist recalls how he was captured in 2012 when he first arrived in Syria. Since November 2012, Cantlie outlines, many things have changed. He clearly describes the great expansion that the Islamic State has experienced since his capture, noting that they control large territories in both Syria and western Iraq. The journalist notes that the size of this territory is larger than Britain and many other world nations.

Cantlie then goes on to address his own government, criticizing its policy (as well as the United States’ policy) of not negotiating on behalf of their citizens. According to him, he has been abandoned by his government and whether or not he survives this ordeal, some verifiable facts should be made public.

Mr. Cantlie notes that other European nations had negotiated with the Islamic State extremists and had come to agreements that made it possible for them to retrieve the captives that were under the control of ISIL. The imprisoned journalist clearly wanted to point out that the governments of Britain and the United States had refused to pay cash ransoms (as other nations had done in the past to ensure the safety of their citizens).

Curiously, Mr. Cantlie’s discourse seemed to prepare a possible audience for future such videos (apparently, he was preparing a sort of lecture series in which he would reveal the facts he had mentioned as being verifiable about the Islamic State).

The timing of Mr. Cantlie’s video release is nothing if not curious, as it happened precisely when momentum was building in Washington for a military intervention to the cruelty that the Islamic State has shown. On Wednesday, one day before the 3 minute 21 second video showing Mr. Cantley, the House of Representatives had voted for the authorization that the United States train and arm Syrian insurgents who had been opposing the rapidly ascending Islamic State.