You are here: Home / National News / Free Marijuana Giveaway for Hundreds of Veterans 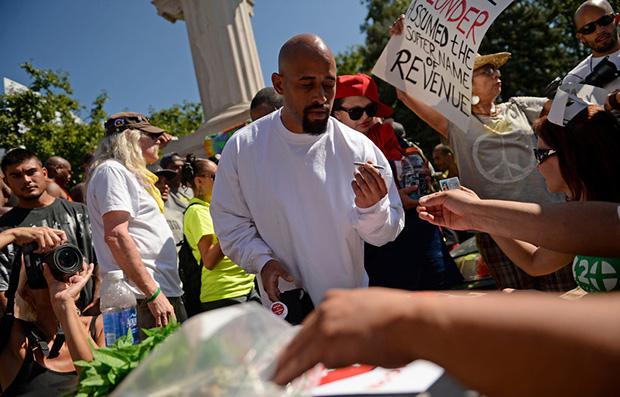 During a special giveaway in Denver aimed at showing the public that marijuana did indeed help ease pains, hundreds of military veterans were given free pot.

The event on Saturday hoped to provide veterans with an alternative to the prescription drugs they use to ease anxiety, PTSD, pain as well as other issues. Grow4Vets, the group that organized the giveaway claims to have given away more than 400 bags of products infused with marijuana during the Denver Cannabis Giveaway.

Roger Martin, founder of the Grow4Vets group told reporters that the organization had the desire of helping veterans with their medical conditions. These include post-traumatic stress disorder, traumatic brain injury, chronic pains as well as several other ailments. Roger Martin is also a veteran and it’s precisely because of his experience that he began the initiative.

Veteran army nurse Stephanie Burton admitted that she too struggles with post-traumatic stress disorder and that marijuana makes it possible for her to sleep at night. Other veterans, such as Afghanistan vet. Brian Nance, 29, claimed to have used morphine as a way to wean himself off from other, harder drugs, such as morphine (he was using the pain killer after he broke his back during a fall). According to Nance, taking a pill every 4-5 hours is a big deal and he prefers to use cannabis, especially since it’s proven very helpful over time.

There were those, however, to criticize the event, claiming that marijuana had been rejected by Colorado as an alternative treatment option to post-traumatic stress disorder. Thankfully, it is legal in the state to offer marijuana for free as well as to buy the recreational drug from designated stores.

Colorado Smart Approaches to Marijuana Coalition’s Bob Doyle claimed that the event on Saturday was reckless and endangered the veterans as the drug was reported to cause paranoia as well as other side effects.

“Obviously things that we would not want somebody with PTSD to be experiencing,”, Doyle told reporters.