During the violence in Islamabad where protesters have stormed the residence of Pakistani Prime minister, three people lost their lives as activists demanded Nawaz Sharif’s resignation. On Saturday night, the quiet Streets of Islamabad turned into a war zone as anti-government activists violently clashed with the police. The fighting went on for hours as protesters marched on through clouds of tear gas and raining rubber bullets that the police officers used against them. 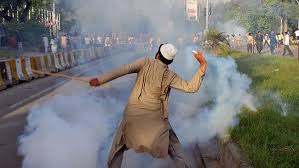 According to recent reports, three people have lost their lives during the protests and hundreds were wounded.
On Monday, the protests continued as demonstrators pushed again and again in an attempt to reach the prime minister’s residence. While police officers were using tear gas and rubber bullets against demonstrators, they were hurling rocks and other pseudo-ammo at police forces.

The protesters have been camping for over two weeks near the official residence of the Pakistani Prime Minister. In a joined effort to reach the residence, they made it to a gate where paramilitary Rangers and army troops awaited them.

Allegedly, protesters also attacked the building of the Pakistani television, causing its transmission to go off air afterwards.

These violent clashes have shattered any hope that former cricket legend Imran Khan and cleric Muhammad Tahir ul-Qadri would reach any agreement with the Prime Minister Nawaz Sharif whose resignation is the sole demand of protesters.

Imran Khan, the chairman of the Pakistani Tehreek-e-Insaf party alleges that last year’s elections through which Sharif came into power for the third time were rigged. Consequently, he and all protesters are demanding that the Prime Minister not democratically chosen resign effective immediately and give way to new and democratic ellections.

While protests have been mostly peaceful until last week, Khan and Qadri insist that protesters will not be settling for anything other than Sharif’s resignation and as such, the prospect of dangerous confrontations is raised.

On Saturday evening, protesters at the suggestions of Khan and Qadri entered highly fortified zones of the capital and according to the government, the police was forced to respond to the violent protesters. It seems demonstrators took shipping containers and repurposed them as barricades as they were advancing towards the residence of the Pakistani Prime Minister.

Images posted on social media show the bodies of demonstrators bloody and scarred from the rubber bullets and baton charges.

Even Pakistan’s journalists were injured as they were trying to broadcast images of the clashes.

There have been attempts at mediating the conflict but neither Khan nor Qadri are prepared to accept anything else than their demands.