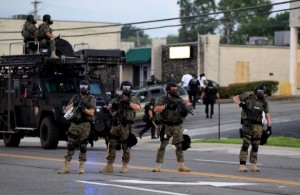 The tragic events that have taken place in Ferguson, Missouri have sparked new discussions on subjects such as police tactics and the role of the media in reporting or instigating the public. The latest news has revealed that police officers in Ferguson have started wearing and using body cameras.

Tom Jackson, Ferguson Police Chief, has revealed to the media that around 50 cameras were donated to their task force last week by two companies: Safety Visions and Digital Ally. Some officers wore the devices during a protest which took place on Saturday and captured what the Police Chief says are images of demonstrators taunting the police.

Each officer is said to receive one camera and representatives from the companies which donated the devices had already instructed the department over the course of the weekend on how to use the cameras.

Jackson said that the officers are really enjoying them and that they are trying to get used to using them.

Ever since the shooting of 18-year-old Michael Brown by police officer Darren Wilson, there has been an increasing support for police officers wearing outward-facing cameras.

Senator Claire McCaskinn, D-Mo., suggested last week that all police departments should require their officers to wear body cameras so that they would receive federal funding. Like other supporters of the devices, she said that footage from the scene could help establish if an officer is being wrongfully accused of misconduct or not.

Everywhere I go people now have cameras. And police officers are now at a disadvantage, because someone can tape the last part of an encounter and not tape the first part of the encounter. And it gives the impression that the police officer has overreacted when they haven’t.

Some leaders of law enforcement and advocates for civil liberties are saying that there is lack of clear guidelines on how the cameras should be used and that it could potentially challenge the goals of the departments to create a greater accountability of officers and ultimately endanger the privacy of the public and also of law enforcement officers.

What are your thoughts on this news? Do you think the cameras are a good idea or do you think that the police wearing them could cause more harm than good? Drop us a line in the comment section below and tell us what you think about this subject, we love hearing from our readers!