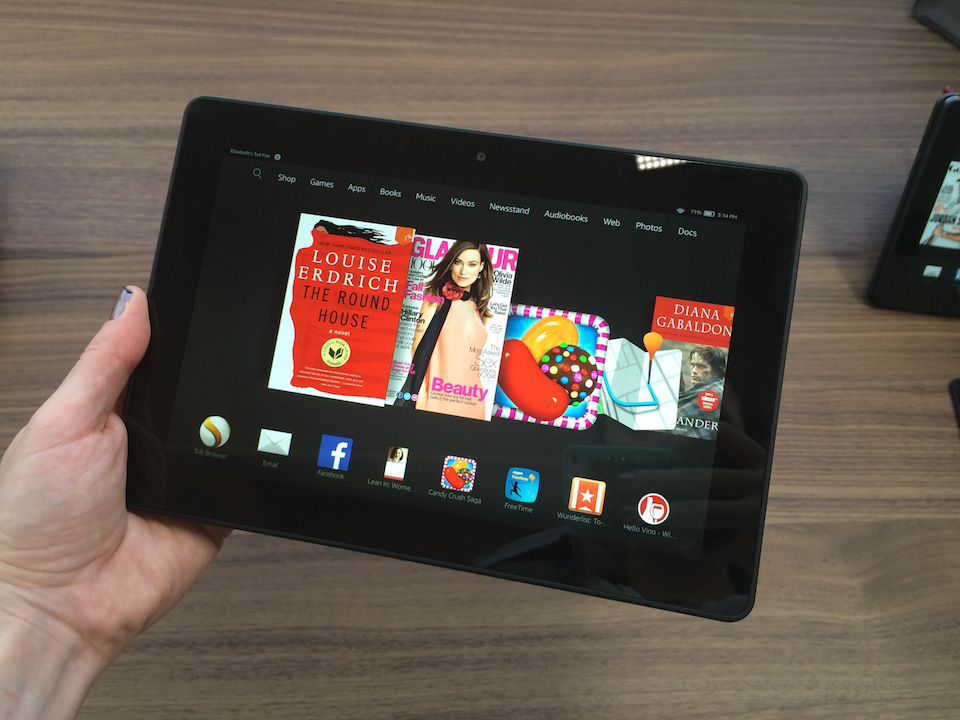 After the failed Android Fire smartphone, Amazon returns to what it knows best – Kindle. The Seattle-based company released a couple of impressive tablets and e-readers, along with an interesting accessory, a wireless keyboard.

The all new Kindle Voyage is a 6.4 inches e-reader sporting a ultra-crisp display. The 300 PPI density coupled with next generation Paperwhite technology prove that Amazon knows its niche far too well. Even if this is the seventh generation Kindle, the company still manages to noticeably improve its product.

The thinnest Kindle will be sold for $199, but it does have a couple of extra features that make it worth it. Turning the pages on Kindle Voyage will be less noisy thanks to the haptic feed-back touch buttons, a technology called Pagepress. Books can be easily downloaded through free 3G connectivity offered by Amazon to the glass-display fancy e-reader. Kindle Voyage not only allows you to read in the dark, but adjusts the luminosity very subtly to protect your eyes.

A new feature called Word Wise will turn this new enhanced Kindle attractive to people learning English. More complicated words will have a short definition displayed on top of them. The function can conveniently be adjusted according to your knowledge level.

For those who want a versatile tablet, Amazon released the Fire HD 6 at $99 and Fire HD 7 at $139. With a 1.5 GHz quad core Mediatek processor, the Fire HD is truly the most powerful tablet under $100, as Bezos, Amazon’s CEO, claims. Both tablets sport Gorilla Glass displays, as well as front and rear cameras and run Fire OS 4.

Amazon Fire HD Kids Edition is an adapted version of the Fire HD. The children oriented tablet comes with a couple of features for easy parental control. But the courageous selling point is the 2 year guarantee covering almost anything. Even if the tablet is in pieces, Amazon will offer you a brand new one.

The star of the show, however, is the Fire HDX. The 8.9 inches tablet offers a stunning 2.560 X 1.600 resolution – a million pixels more than the iPad Air! Probably the fastest tablet at the moment as well, due to its Snapdragon 805 quad core processor running at 2.5 GHz. The faster 802.11ac Wi-Fi is available as well. But what is even more interestingly about this new tablet is the fact that it can run Windows from Amazon’s cloud, a critical feature to enter the business segment. At $379, it is not exactly cheap, but the specs make it a bargain.