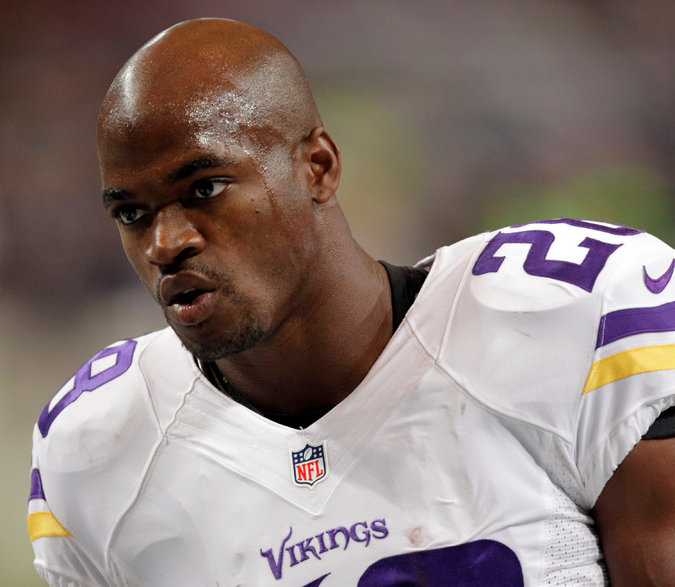 Adrian Peterson, the star running back for the Minnesota Vikings was released on bond after having been taken into custody in Texas on Saturday morning. The athlete was indicted on child abuse charges after he used a branch when disciplining his son.

Peterson, 28, was confined at 1:06 AM according to a listing on the Montgomery County Website, but the running back soon posted the $15,000 bond and was released in less than half an hour later.

According to Rusty Hardin, Peterson’s attorney, the child abuse charge states that Peterson had used a switch when spanking one of his sons. Hardin’s Friday statement was completed when the attorney explained that his client did not mean to hurt his boy. Neither the injuries nor the age of Peterson’s son were disclosed during the statement.

According to Hardin, the running back only used the same kind of discipline on his son that he himself had experienced when growing up in East Texas. He added that Peterson used his judgment as a parent to discipline his boy.

“Adrian will address the charges with the same respect and responsiveness he has brought to this inquiry from its beginning. It is important to remember that Adrian never intended to harm his son and deeply regrets the unintentional injury.”, Hardin said during his statement.

Until now, Adrian has fully cooperated with authorities, he hasn’t hidden anything that happened and testified on his own accord in front of a grand jury for several hours.

After the events became public, the Vikings soon announced that Peterson would be moved to the inactive list for the Sunday opening game against New England.

These violence allegations come after a week of extreme scrutiny against the NFL, because of a video released on the web in which Ray Rice punches his teen-fiancée in an elevator. The domestic violence charges weren’t a first offence, since a previous video had also been available in another casino, where Rice had been seen dragging his unconscious fiancée out of the elevator.

The league is also closely watched as it also deals with the cases of Greg Hardy (Carolina Panthers) and Ray McDonald (San Francisco 49ers), both players still having to deal with domestic abuse cases. Hardy was convicted for assault and communication of threats on July 15, but he is appealing the court decision.

Peterson’s situation hasn’t been commented by the NFL, but there’s pressure on the league regarding its attitude concerning such cases.