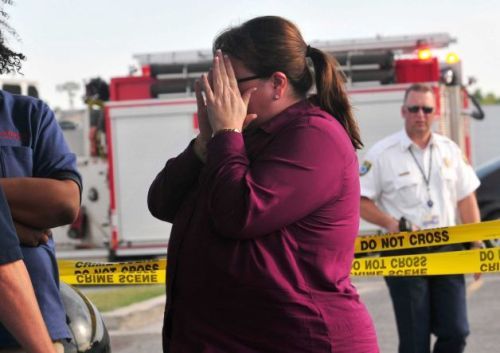 Moore, Oklahoma, was shaken on Thursday after a deranged African American man stormed into a food processing plant and stabbed two women, beheading one and seriously injuring the other.

Colleen Hufford, 54, was the first person to cross paths with the attacker. The man proceeded to stabbing Colleen violently, until her head was severed. The other victim, Tracy Johnson, 43, is currently stable in spite of her numerous wounds.

The 911 call recording that was placed during the attack was released on Friday. It begins just as the voice of a man is heard yelling: “Shut the doors”.

“We have someone attacking someone in the building,”

he tells the dispatcher soon after. He explains that the attacker entered the plant through the main entrance and soon made his way to the front office, the shipping office and then the customer service office.

“Can you hear this in the background? And that, that’s a gunshot.”

Three gunshots were heard in total.

Many questions remain unanswered about the incident in which 30-year-old Alton Alexander Nolen would have surely taken more lives had it not been for the company’s CEO (an off-duty reserve sheriff’s deputy). According to Sheriff John Whetsel, Mark Vaughan, CEO and former reserve deputy with the Oklahoma County Sheriff’s office, didn’t hesitate to protect his staff when he heard that a killer was on the loose.

On Saturday, around 6 PM, doctors informed police officers that Nolen was beginning to come out of sedation and that investigators could plan to start interviewing him as soon as he could understand what was going on.

The information that police does have until now is that Nolen attacked the women soon after he had lost his job. Until March 2013, the man had been incarcerated for possession of a controlled substance, resisting arrest and escaping confinement. He had also been actively trying to convert his co-workers to Islam.

The FBI was called in to help police dig deeper into the attacker’s background. Sgt. Jeremy Lewis of the Moore Police Department told reporters:

While some feared that the brutal beheadings may have been connected to the extremist group ISIS, these rumors were soon dismissed by authorities. On Friday, U.S. law enforcement officials assured the public that there was no connection between the Moore attack and terrorism.