You are here: Home / National News / Yazidi Men at the Mercy of Islamic State Fighters

Saturday marked a horrific day when countless Yazidi men were shot by Islamic State extremists after they were lined up in groups. Islamic State fighters opened fire on the Yazidi men and killed them with assault rifles, only to abduct their wives and children later.

The mass killings in Kocho were a testimony to the fact that the Iraqi people are still at risk in spite of the U.S. and Iraqi airstrikes meant to destabilize ISIL.

In the meantime, Iraqi citizens explained that warplanes had targeted Islamic State fighters that had captured a large dam near their village 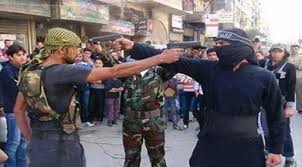 A week ago, airstrikes ordered by the United States began against IS militants, partly because the US desired to prevent the massacre of the tens of thousands of Yazidis that were stranded on mount Sinjar. Kurdish fighters could help many of the stranded Yazidis and they are now safe.

IS militants had promised Kocho residents that if they would gather within a school of their choosing, they would be allowed to safely leave the city. Witnesses reported that soon after, IS militants divided the men from the women and children. They reportedly took the men in groups of twelve and shot them at the end of the village.

A witness who escaped the cruelty of Islamic State militants explained that the soldiers then walked among the bodies of the men they had killed to make sure they didn’t miss anyone and finished off all those who appeared to have survived.

The witnesses who were so lucky as to be able to tell what happened were among the Yazidi men scheduled to be killed. IS militants simply overlooked them or thought they were dead on the floor, so the men had the opportunity of escaping.

Apart from this information, Yazidi lawmakers also support these allegations. Kurdish security officials and Iraqi officials are aware of the situation and provided similar accounts that attested to the violence of Islamic State soldiers.

The facts aren’t clear as to how many men were actually killed by IS fighters during this period, but both Iraqi and Kurdish officials have said that around 80 men had died. Yazidi residents have disagreed, stating that Kocho had at least 175 households and that few families were actually able to escape the Islamic State militants before they had invaded the town.

According to witnesses, many of the Yazidi men that were in Kocho contacted relatives and told them about the horrors that they were enduing.