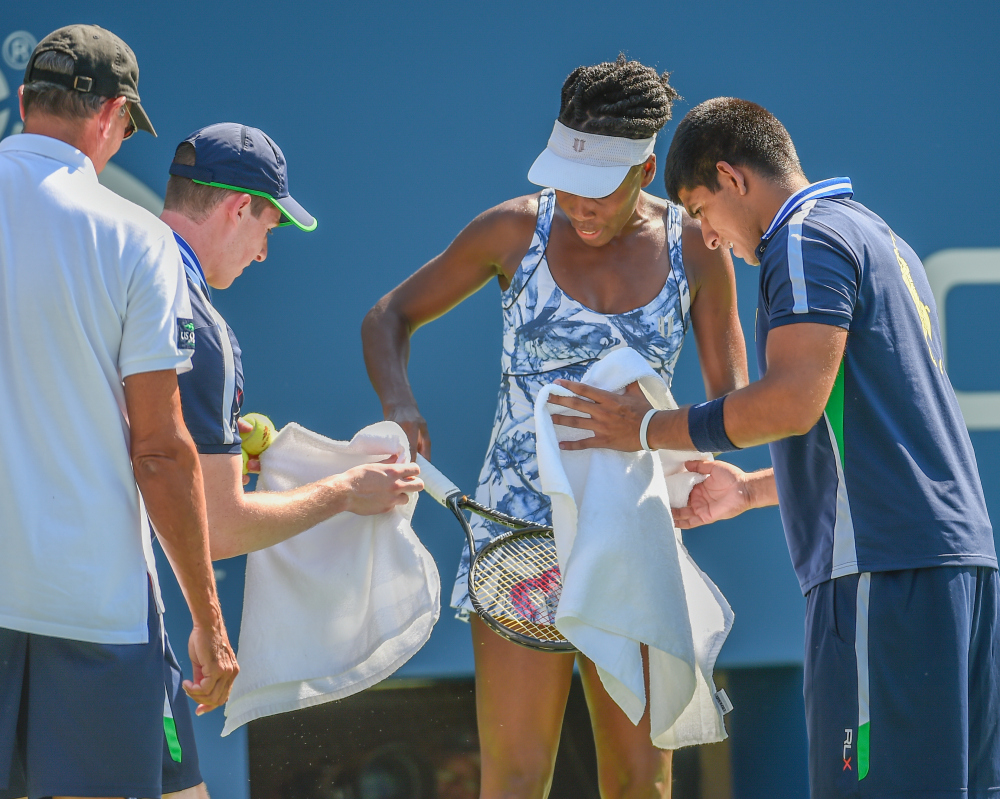 Venus Williams, 34, beat 43-year-old Kimiko Date-Krumm in the second match of the day at the 2014 U.S. Open. Despite Williams’ being in the greatest shape she’s been in for years this summer, her debut for this year’s US Open was a bit floppy.

The most exciting moments of the match on Arthur Ashe Stadium occurred at the middle of the second set, after a bumblebee started buzzing around Date-Krumm’s face as she tried to serve. The game had to stop for a full minute as the ball girls and boys group tried swatting the bee with the racquet and towels.

The bee finally flew away and landed on Williams a few minutes later. Williams spent more than a minute trying to get away, waving her hand and blowing at the bee. While some fans shouted “Smash it!” Williams refused to take a full, serious swing. “Make it go away,” Williams told a pair of ball boys, one of whom smothered the insect with a towel and ran off with it.

According to the WTA, Williams is 34, Date-Krumm is 43 and their combined 77 years is believed to be the oldest for opponents in a women’s Grand Slam pairing.

“Definitely I was younger today,” a smiling Williams said. “But when you step out on the court, I don’t think anybody thinks about age.”

As far as the actual game is concenrned, Date-Kumm had an amazing run in the first set, as she broke Williams twice to take the set easily in 34 minutes. But after the bee episode, Williams came back with full of energy, winning the second set and continuing that momentum into the third set to send Date-Krumm away just like the bee, 2-6 6-3, 6-3.

“I was feeling better this summer and I had some better results,” she said. “I never want to play three-setters. It’s not in the plan. Somehow I ended up in these matches. I would like to think the more I play, the better I’ll get at closing it out.”

Williams is set to battle it out with Time Bacsinszky in the second round and if she progresses even further, she may have a chance to prove herself against second seed Simona Halep in the fourth round.

Williams hasn’t won a major since Wimbledon in 2008. Her performance has fallen off dramatically since she revealed in 2011 that she had an autoimmune disease called Sjogren’s syndrome.