You are here: Home / National News / Two Hurricanes and an Earthquake to Shake Hawaii

The paradise island hasn’t been hit by a hurricane since 1992, but it seems that for the first time since then, vacationers and residents will have to prepare themselves for an impact on Thursday. Hurricane Iselle will be the first hurricane to reach the island in over 22 years, but right after Iselle will have passed, another storm, Hurricane Julio will also pass the north of Hawaii at the end of this week. 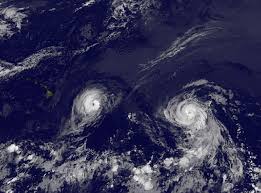 On Thursday afternoon, Hawaii was also shaken by a 4.3 magnitude earthquake. According to reports, there were no injuries or damages reported.

Mike Cantin, National Weather Service meteorologist explains that the storm resurged only to keep its strength. In Maui, Molokai, Lanai and The Big Island schools are closed on Thursday, tourism has been disrupted and food warnings have been prompted because of the imminent threat of the two hurricanes. Even Hawaiian Airlines has agreed to waive reservation change fees and fare differences for tourists wanting to change their travel plans after having heard of the weather conditions in the islands. Ann Botticelli, Hawaiian Airlines spokeswoman, explained that passengers could alter their travel plans for Thursday and Friday without any additional charges. She added that hundreds of customers had already inquired if such flight alterations were possible.

Gov. Neil Abercrombie allowed officials to use disaster funds that were set aside by state Legislature after signing an emergency proclamation.

In 1992, when Hawaii was last hit by a hurricane, six people lost their lives and more than 1,400 homes were destroyed in Kauai. Lixion Avila, hurricane forecaster with the National Hurricane Center in Miami, said that Hawaii has been lucky so far and that if everyone is prepared and takes this threat seriously, there shouldn’t be problems.

Meteorologists explain that in years with developing storms like El Nino, other storms are rare but not unexpected. Ocean temperature changes affect the weather worldwide and as a result, such storms may occur.

There are currently four hurricanes in the Pacific Ocean and Hurricane Iselle, together with Hurricane Julio are two of them.

Before this hurricane season, weather officials announced that this year could bring anywhere between four to seven tropical cyclones in the Pacific Ocean.