You are here: Home / Health / Sierra Leone Started Deploying Troops to Stop the Spread of Ebola

Sierra Leone declared a state of emergency over the weekend and today it was announced that the government would deploy hundreds of troops and police officers to ensure that the patients and infected people remain in isolation. This decision was caused by the widening crisis of the spread of the deadly Ebola virus, which carries a death rate of 60%.

Around 750 soldiers will be deployed in and around the clinics which are housing Ebola patients, mainly in the country’s east, at Kenema and Kailahun. They will set up camp in the areas where the disease is most virulent. The police will also be present around the homes for the people who are at risk of having contracted it (mostly people whose family members have already contracted the disease). This information was shared Abdulai Baratay, a government spokesperson.

The highest number of Ebola virus infections was recorded in the West African country of Sierra Leone: 646 and the second-highest death, 273. The country has a total population on 5.7 million people and it is the size of South Carolina. 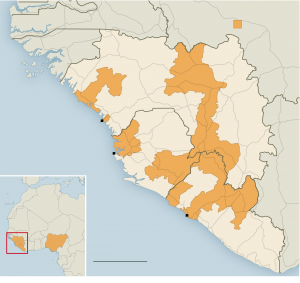 In most cases the Ebola virus infection mortality rate is around 60% but in Sierra Leone it is up to 90%. The reason behind that, many believe, is the fact that people simply refuse to acknowledge that Ebola is a real disease. There have even been cases where people entered the clinics to free their relatives, who were patients there. They did so without respecting any rules concerning quarantine and without giving a second thought about their own health.

These situations should be avoided once the deployment of soldiers happens. Unisa Sesay, the president’s director of communications, said in an interview:

Where there is a serious situation, the president can invoke military assistance to civil power. You have to understand that there has been a lot of lawlessness connected to this Ebola business. […]Family members have forced their way into these medical facilities and removed patients and taken them home, and overpowered the workers.

Mr. Sesay is blaming the increasing rate of the disease on the ignorance of the people and on their lack of respect for the isolation measures and advice handed out by the government. The no handshake rule is being turned into a joke, as some don’t believe that there is a real Ebola threat.

What are your thoughts on this news? Share them with us in the comment section below. We want to hear what you think about this.