You are here: Home / Health / Second US Ebola Patient Arrives in U.S.

A place carrying Nancy Writebol, the second U.S. Ebola patient, landed in Maine with the purpose of refueling, only to continue its flight to Atlanta. It is heading towards the same hospital that is offering treatment tot the first U.S. Ebola patient, Kent Brantly.

Nancy Writebol was taken from Liberia today, inside a medical aircraft. The plane that was carrying the 59 year-old patient landed at the Bangor Interntional Airport in Maine at around 8 a.m. WCSH of Portland, Maine covered the landing of the plane at the airport. 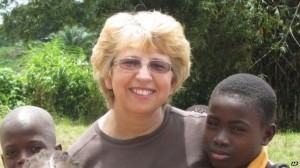 Mrs. Writebol will be treated by specialists in an isolation ward at the Emory University Hospital in Atlanta. Nancy Writebol is a mother of two who lives in Charlotte, North Carolina. She’s a longtime missionary who’s been working for SIM USA as a hygienist. Her job was to decontaminate protective suits worn by healthcare workers in an isolation unit inside a Monrovia treatment center.

Kent Brantly, the first American Ebola patient arrived at the Atlanta hospital on Saturday on his own two feet, but wearing a protective suit. Sources are saying that Brantly is doing well and responding to the treatment. Brantly and Writebol are believed to be the first Ebola patients ever treated inside the United States. The only reason why the pair returned to the U.S. separately was because the plane was only equipped to transport only one patient at a time.

The two patients were serving a joint team in Monrovia that was run by SIM USA and Samaritan’s Purse, both Christian aid groups. It was revealed by a representative for Samaritan’s Purse that while still in Liberia they received an experimental drug that was only tested on monkeys.

Nancy Writebol’s arrival came only one day after a man was hospitalized at the Mount Sinai Hospital in New York City after he came back from a West African country with Ebola symptoms: high fever and a stomach ache. Other than that, he was in good condition, some hospital officials have said. They also added that it was very unlikely that the patient had the Ebola virus and that they are testing him to find the cause of his illness.