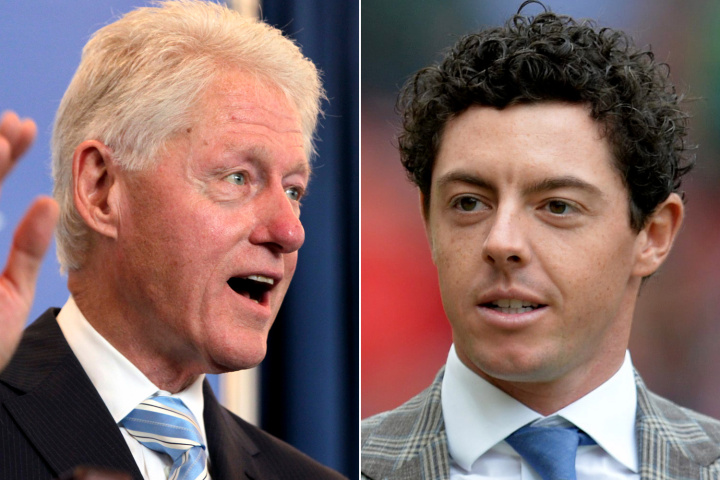 Two days after finishing in a tie for 22nd at The Barclays in New Jersey, where his run of three successive wins came to an end, McIlroy enjoyed a pleasant and quite long lunch with former U.S. president, Bill Clinton, in Sag Harbor, New York. “It was a cool afternoon,” Northern Irish world number one McIlroy, 25, told reporters on Thursday, just before the Deutsche Bank Championship, the second of the PGA Tour’s four FedExCup playoff events.

“I think he promised Hillary he had to do something, so he spent the morning with her and her family,” McIlroy said.

“He’s obviously a huge golf fan, so we talked a lot about golf. But we talked about a lot of other stuff. He was telling interesting stories when he was in office and dealing with different leaders from certain countries,” McIlroy recalled. “It’s really interesting, and it’s almost like you get a lifetime sort of education on that stuff that you didn’t already know. (…) I take a lot out of those sorts of experiences. It’s an honor for me to be in a position where I’m able to do things like that.”

The Northern Irishman has had a very good summer, winning the Open, the US PGA Championships and the WGC-Bridgestone Invitational in between, therefore establishing himself as the world’s No. 1 golfer. His lowest was at The Barclays last week, as he had to settle for a share of 22nd.

As far as his future winnings are concerned, McIlroy is quite easygoing. “I am very relaxed, I’m going out on to the golf course and I’m not really putting a whole lot of pressure on myself. I’m just going out and playing and I know that if I play well, that I’ll have somewhat of a chance to maybe win the tournament. I am excited for the opportunity to get back to that number one place and move on to Denver with a little bit of a lead.”

This week’s Deutsche Bank event finishes on Monday, meaning it does not count towards Ryder Cup qualification for European players, for whom the deadline is Sunday. The top 70 players on the FedExCup points list after the Deutsche Bank Championship advance to next week’s BMW Championship in Englewood, Colorado where the leading 30 will qualify for the Sep. 11-14 Tour Championship finale in Atlanta.

McIlroy is currently second in the FedEx Cup rankings behind Hunter Mahan, who won the first leg of the playoffs last week at The Barclays